All About Asian Pears (Pyrus pyrifolia)

Origin of Asian Pears:
Asian pears, as their name would suggest, originated in China during the Tertiary period approximately 65-55 million years ago. A 2012 ScienceDaily article explains that the earliest Pyrus grew into 5,000 different cultivars, many of which are native to Japan and Korea. Oriental pears likely predate the other large category of “Occidental,” or, “European” pears.

Several ancient Chinese texts reference pears. The book, “Apples: The Whole Story” explains that Feng Li relinquished his duties as a diplomat of China in 5,000BC, choosing instead to spend his days grafting pear and apple varieties.

Pears likely came to India eons ago, and several of the oldest pear varieties are naturalized throughout the Himalayas. Indigenous species of Northwestern India include P. communis, P. Salicifolia, P. regeli, and P. pashia. In fact, another local “kainth” pear (Pyrus pashia) bears many similarities to the rough-textured, grainy Asian pear. Farmers commonly use Asian pears as the rootstock by which to cultivate other pear types.

According to “Source Book of Indian Civilization,” the Mughal Emperor Nor-u-Din Muhammad Jahangir (1569-1609) waxed poetic about heavenly nashpati pears of Kashmir. He claimed that they tasted better than any found in Kabul.

Availability of Asian Pears in India:
Like other temperate fruits, India’s pears are a minor crop. Figures cited by the “Division of Fruits and Horticultural Technology” in New Delhi quote that India produces a mere third of one percent of the total global pear output.

Asian Pears flourish through the Northwest Himalayan regions at elevations between 780 to 1980 meters. India’s largest growers of Asian pears are Jammu and Kashmir, with Himachal Pradesh ranking second. Aside from commercial cultivation, several wild varieties grow throughout Meghalaya’s Khasi hills, Uttaranchal, and the sub-tropical regions of Punjab.

Pears first come into season by July in the high hills of Himachal Pradesh. In the temperate zones of Uttaranchal, Jammu and Kashmir, pear season lasts from the end of July through August.

Where to find Asian pears in India:
Many types of Asian pears hit the market when in season: some have white skin and an oblong shape resembling Bartlett pears, while others are brown, spotty, and globular like a large apple. Some are round and firm, with tight golden skin. To go to our writeup about the many varieties of Asian pears and their distinctions, click here.

In July and August, Asian pears are ubiquitous and inexpensive. Outside of these months, imported pears from China are available at a higher price. No matter the season, the fruits will always cheaper in India and China than in Western countries. There, a single pear may cost the price of an entire kilo.

Checking for Ripeness in Asian Pears:
Select Asian pears with firm texture and smooth skin—these indicate that the flesh is crisp and compact. Avoid fruits with wrinkles, dents, cuts or bruises. If it were chucked from the second floor of a building, a ripe, crisp pear would bounce; perhaps a large chunk would dislodge from the fruit. If the pear looks as if it would bruise and splatter upon hitting the ground, it’s likely overripe.

The best Asian pears emit a sweet, pleasant aroma at peak ripeness. However, fruits in cool storage will be odorless due to the cold masking the smell. 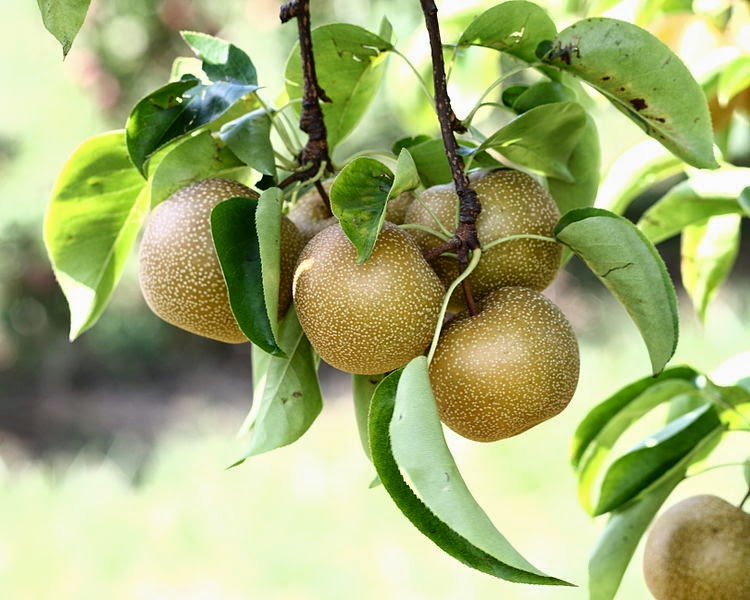 Taste of an Asian Pear:
The taste of a delicious Asian pear is firm, sweet, crisp, watery and juicy. Most fruits are not acidic or bright; instead, they exude a mellow, hydrating sweetness with hints of melon.

If the texture is too grainy, mushy, or bland, the pear is overripe or was harvested incorrectly. A key difference between Asian pears and European pears is the texture—the former’s flesh is crisp and tightly packed, whereas the latter is granular and sometimes pulpy.

The texture and taste of Asian pears resemble jicama or a water chestnut, but sweeter. When biting into a good pear, the crunch should resemble a green apple’s.

Nutritional Value:
As per the USDA nutrient database, 100g of Asian pear contains the following values:

Put in perspective: a large Asian pear is 227g. 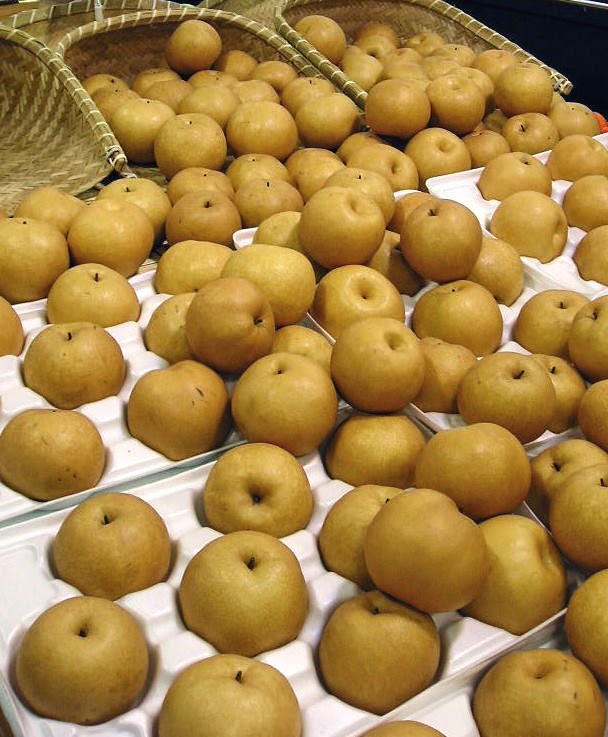 --A 2012 article published in Phytotherapy Research affirms Asian pear’s traditional use as a hangover remedy, as certain chemicals in the fruit stimulate alcohol-metabolizing enzymes.
--A 2012 study published in Food and Chemical Toxicology reveals that the Chinese white pear flesh exhibited potent anti-inflammatory and moderate anti-microbial properties.
--A 2012 article published in the Journal of Agricultural and Food Chemistry” found that the Asian pear varieties, Xuehua and Nanguo, had some of the highest levels of anthocyanins than other pear varieties, thus exhibiting higher antioxidant levels and greater anti-inflammatory activity.

Pear skin contains quercetin, a flavonoid with incredible medicinal benefits:
--A 2013 study published in “Elsevier” found that quercetin has neuroprotective benefits that may alleviate symptoms of Parkinson’s disease.
--A 2013 study published in “Neurotoxicology” indicates that quercetin helps prevent oxidative damage to neural precursors, thereby boosting the health of adult brains.
--Quercetin has a number of anti-cancer benefits: A 2012 study published in the “Annals of the New York Academy of Science” highlights its efficacy against leukemia cells; A “Food and Chemical Toxicology” study outlines the compound’s effectiveness against human gastric carcinoma cells, and a 2013 study mentioned in “Bioorganic and Medicinal Chemistry” outlines quercetin’s cytotoxic activity against breast cancer cells and colorectal carcinoma. 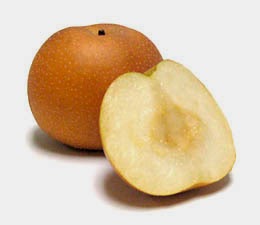 How to Open/Cut:
Consume an Asian pear like an apple or other pear varieties: Use a medium-sized knife to slice into quarters and slice away the black-seeded core. Peeling is not necessary, as the skin is perfectly edible. Furthermore, the peel contains a number of health benefits outlined above.

Some inexpensive apple de-corers and slicers are available in the Indian markets, and will work for Asian pears: Simply line the core with the center, press down, and remove the core. Perfect slices will remain.

Note: Thoroughly wash and disinfect pears, but only before consumption. Otherwise, water will hasten the fruit’s spoilage. To make a natural disinfectant, mix water, lemon juice, baking soda and apple cider vinegar. Transfer to a spray bottle, and use as necessary. Simply wait five minutes after spraying the pear before rinsing.

Storage:
Unlike some European varieties of pears, Asian pears will not continue to ripen once picked from the tree, nor is it desirable for them to grow softer in warmer, humid temperatures.

At room temperature in a cool, dry kitchen, Asian pears will keep for a week or two. If the conditions are humid, on the other hand, transfer the fruits to the refrigerator’s crisper: They will keep for over two months. Do not place Asian pears in any moisture-trapping container, such as a plastic bag. Because the fruits bruise easily, avoid stacking fruits atop the other. 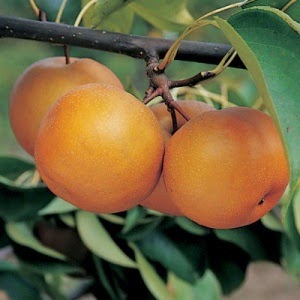 --Add the pears to a fruit salad consisting of coconut flakes, walnut slivers, mango and Bartlett pears.
--Include the chopped fruit in Asian cabbage salads made with sesame rice vinegar dressing, oil, shredded carrot, cashew, green onions, and sesame seeds.
--Create a simple, warming Chinese sweet soup by boiling water and adding palm sugar to sweeten. Add chunks of Asian pear and continue to heat for a minute. Remove from the stove, and serve. If desired, include other juices such as apple, lemon or orange.
--Make an Asian pear salad by adding muskmelon and tossing with herb mustard dressing.
--Poached Asian pears are a popular use for the fruit: Place whole or sliced pears in a shallow baking dish, adding water and sugar. Transfer to the baking rack in the oven and simmer the pear for an hour. A number of ingredients can be added to the water, including port wine, orange rinds, cinnamon sticks, ginger, and anise, to name a few.
--Make Asian pear butter or jam.
--Steam Asian pears until soft, drizzling with chocolate, agave or honey and topping with nuts, chocolate, or stewed fruits.
--Make an Asian pear frozen beverage by peeling the fruits, de-coring, and then blending the slices with some sugar. The high water content will make for a fine slush when frozen. However, check on the concoction and stir it every hour until it has a desirable grainy texture. Add alcohol if desired. 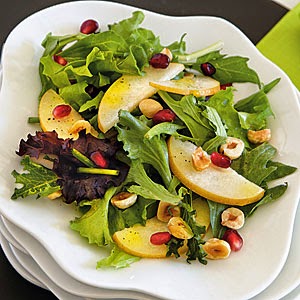 Random Facts:
According to the “Encyclopedia of Superstitions, Folklore, and Occult Sciences of the World,” an adult should pick the first ripe pear from a tree, as it’s unlucky for a child to do so.

An old German tradition holds that an ancient pear tree would only bloom and bear fruit when the German empire thrived. In 1806 upon the dissolution of the Empire, the tree withered. Over 60 years later during the establishment of the new German Empire, the tree miraculously bore fruit yet again. A branch of this prophetic pear tree still sits in a Berlin museum.

Posted by Catherine Reddy at 12:17 AM