All About Bananas in India

Bananas have thrived on the Asian subcontinent for thousands of years. As early as the 13th century, however, tropical fruits were a novel concept amongst Europe’s aristocracy. Marco Polo regaled Europeans with tales of strange and unusual fruits, including the banana. In the US, the 100th anniversary celebration of the Declaration of Independence featured a banana as its exotic showpiece.

In India, bananas are integral parts of the culture. The god Vishnu proclaimed of the fruit, “As the bark and leaves of the kadali tree are to be seen in its stem, so thou art the stem of the universe and all things visible to thee.” Even today, followers of Shiva and Vishnu believe banana plants are auspicious. Upon attending an Indian wedding, one may see a banana stalk near the stage symbolizing fertility, and women desiring a son thereafter may worship the plant during the month of Kartik.

Origin of Banana:
Bananas originate in Southeast Asia and the South Pacific. According to an article published by The University of California, Santa Cruz, archeologists pinpoint the Kuk valley of Papua New Guinea as the first site of banana domestication circa 8,000 BCE. Since then, several regions domesticated other banana varieties via hybridization and centuries of refinement. The same article theorizes bananas first appeared in India around 6,000 BCE. Around this period, the fruit flourished throughout the tropics of Australia, Malaysia, and Indonesia.

Today, bananas grow on nearly every continent. 2011 figures published by the UN Food and Agricultural Organization list that India is the largest banana producer in Asia; Ecuador in South America; Tanzania in Africa; Guatemala in Central America; Colombia in South America; Spain in Europe, and Iran in the Middle East. 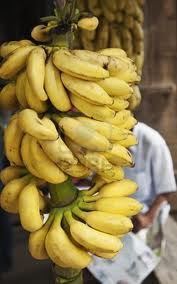 Availability of Banana:
Bananas grow year-round in India, and her citizens consume most of the country’s whopping 30 tons produced annually. Additionally, bananas is the nation’s 7th largest crop. The only foods surpassing banana’s yield are essentials such as rice, buffalo milk, wheat, and—perhaps surprisingly—sugar cane and mangos.

India’s fertile soils support hundreds of banana varieties, but farmers only cultivate roughly 12 local and 30 exotic varieties commercially. Each of these types varies subtly in their taste, appearance, and even aroma. According to the book, “Fruit Crops,” India mostly exports Dwarf Cavendish and Robusta varieties, and locals consume Poovan, Rasthali, Virupakshi and Chakkarakeli varieties.

Where to find Banana in India:
Bananas are a staple food, found in the smallest thatched hut in Mizoram to the gleaming high rises in Mumbai. No produce shop is without a bundle of bananas. Some vendors tie them from their rickety tin roofs, while others line the shelves with five varieties.

The quality of bananas may not be as high in the temperate northern states, but regular transport from the south—coupled with the odd banana plantation here and there—make the fruits easily accessible.

Checking for Ripeness:
With the exception of plantains and a few select varieties, bananas should be yellow; not green. They are also sweetly aromatic when ripe. Though many shun eating bananas with brown/black spots, these mottled fruits are actually at peak sweetness and perfectly edible.

Unripe bananas are hard and light, whereas ripe bananas feel soft and heavy for their size. Additionally, the stem near the top of the banana should peel with ease. If the stem is impossible to bend, it’s likely unripe.

Ripe bananas have a soft, chewy, and almost-mushy texture. Some banana variants have a tougher texture near the core, but all should be pliable and sweet. Unripe bananas are bitter and tough, and the pulp will coat the tongue with a chalky, unpleasant taste if eaten. 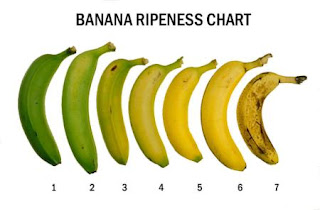 Taste of Banana:
The taste of bananas depends on its cultivar. Long dessert bananas possess a mild, uniformly sweet profile. Short fingerling bananas, on the other hand, have a chewier and slightly tougher texture. The fingerling’s flavor is more complex, robust and less predictable than long bananas: the outer circumference of the banana is sweeter and creamier, whereas the inner radius near the seeds is mildly tart and chewier. Red bananas have a bright tropical taste bearing subtle notes of strawberry and pineapple.

Nutritional Value of Banana
As per figures in the USDA nutrient database, 100g of banana contains the following values:

A report published in the Journal of Pharmacognosy and Phytochemistry tout the following benefits
--Tryptophan, a naturally occurring chemical in bananas, alleviates depression and induces relaxation
--Banana’s high amount of B6 fights PMS by boosting the mood, and reduces seasonal affective disorder (SAD) symptoms by calming the nervous system
-Banana’s organic iron helps stave off anemia due to its ability to bolsters hemoglobin production.
--The fruit’s ideal combination of low sodium and high potassium regulates blood pressure.
--When eaten regularly, students showed improved academic performance over groups who ate no fruits.
--Bananas are a natural antacid, due to its ability to reduce neutralize acidity and reduce irritation of the stomach lining.
-Sufferers of morning sickness may find relief by eating a banana, on account of its blood pressure stabilizing qualities.
-Banana’s nutrients of B6, potassium, and magnesium help a smoker recover faster from nicotine withdrawals.

Scientific studies affirm additional benefits:
--A 2012 study conducted at the Appalachian State University found that consuming bananas were as beneficial to a cyclist’s athletic performance as drinking sports beverages, thus making them a suitable snack before and after workouts.
--Amazingly, a 2010 study published in the Journal of Biological Chemistry found two compounds in bananas that are as effective at preventing HIV as two synthetic anti-HIV medications.
--A peer reviewed medical study published in the British Medical Journal found that increasing potassium intake by eating more bananas reduced the risk of stroke by 24 percent.
--A 2008 study published by the Journal of Food Science reveals that antioxidants in bananas have neuroprotective effects against degenerative diseases, such as Alzheimer’s.

How to Open/Cut Bananas:
Most expose the banana’s flesh by grabbing the top stem and peeling the skin. However, others suggest opening a particularly tough, thick-skinned banana from its bottom.

Another way to open a thick-skinned banana is to score it with a small paring knife: penetrate the skin and make a thin incision from the stem to the bottom. Then, peel away the skin to reveal the fruit.

Storage:
Bananas continue to ripen once picked from the stalk. In fact, farmers pick hard and green bananas with the expectation that shippers will ripen them artificially.

Keep unripe green bananas at room temperature and wait for 7 to 10 days. By a week or so, the fruits should be yellow and ready for consumption.

Do not freeze whole bananas, as the fruit’s peel will become black and bruised. Though its edibility won’t be affected, the fruit becomes mushier and pulpy. To maintain the fruit’s integrity, remove the skin beforehand and cut into half, thirds or quarters. Transfer the chopped fruits to a sealed bag, and place in the freezer. Expect browning to occur. 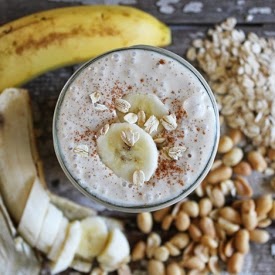 Recipe Ideas:
--Bananas star in smoothie recipes. They pair well with a variety of fruits, from continental berries and apples, to tropical mangos and papayas. To add richness, blend in a tablespoon of creamy nut butter or chocolate.
--In Kerala, banana chips are a popular snack. The recipe changes between vendors: some prefer frying in coconut oil and coating with powdered sugar, while others make a savory snack by adding salt, pepper, and a pinch of chili pepper.  The variations are endless.
--Make creamy banana ice cream by mashing frozen bananas with a hand blender, or by blending in a food processor. Though the texture resembles frozen yogurt, banana ice cream has none of its cholesterol or fat. Like smoothies, banana ice cream offers countless flavor permutations.
--Add ripe, mashed bananas to bread and muffin batter. The fruit’s gooey texture enhances the moistness and chewiness of any baked good.
--Add banana slices to porridge, muesli, and breakfast cereals.
--Use banana as the base for velvety base of pies and puddings: In a blender, mix banana with almond butter, coconut oil, maple syrup, salt, vanilla, cocoa powder. If available, add butterfruit to richen the pie batter. Pour the pudding-like concoction atop a crust made from ground almonds, cashew, and soaked dates. Let the pie set in the freezer for an hour or two, or serve immediately.
--Add banana pulp to dosa batters for a thicker, sweeter variation of the classic South Indian breakfast pancake. 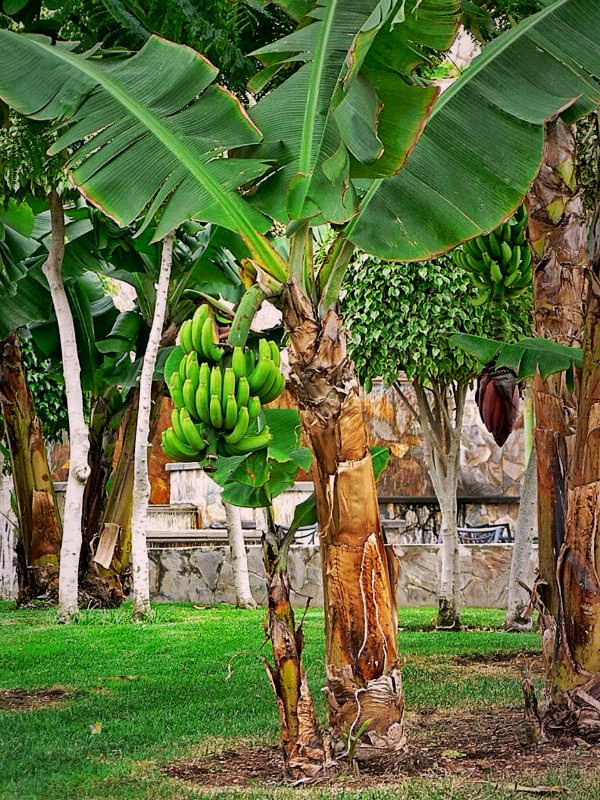 Wild bananas contain seeds so hard that they’re dangerous to the teeth.

Dr. Ken Hashimoto and Cleve Backster believe bananas show signs of intelligence: when they connected the fruit to a polygraph test and gave it simple math equations, it pulsed answers in the form of hums conveyed in ink peaks. These tests offered insight into other types of plant signaling, including reactions to changes in light, temperature, and even external threats such as toxins.

Scientists from Exeter and Oxford University confirmed the superstition that pregnant women who eat bananas have increased odds of bearing a son. Male offspring is also correlated with a higher calorie diet.

Note: Categorizing bananas are a detailed, complex procedure. Some of the most influential work in this field came from two scientists, Simmonds and Shepherd, during the 1950’s. These scientists successfully divided the fruits into Musa acuminate or Musa balbisiana based on clues like the fruit’s color shading, male flowers, and the flower stalk‘s texture.

Bananas are also divided into further categories, including AAAA, AAA, AA, AAB, ABB, AB, ABB, ABBB, and BBB. These rankings are issued based on the number of “points” the fruit scores, as it pertains to its intensity of a given category. For instance, if it shares the most similarity to a Musa acuminate descriptor—such as displaying an obvious bract scar—the fruit receives a 1. If it shows a barely visible bract scar indicative of a Musa balbisiana, then the fruit scores a 5. If the banana falls somewhere along this spectrum, the fruit receives 2-4 points. Once ranked along 15 indices, the points from each category are tallied. This final score dictates the banana’s ranking: if it has 46-49 points, for instance, its classification is AB. Of these categories, AAA, AB, AAB and ABB tend to be the most popular commercial varieties.

Interestingly, no classification category pertains to taste, texture or aroma of the banana.

Posted by Catherine Reddy at 9:26 AM