All About Dates in India

Origin of dates:
Dates are a prehistoric fruit, eaten by the cavemen. Indeed, the plant has earned its title as the “Tree of Life” given its antiquity. An article by Oregon State University explains that the earliest records of dates are from 5,000 to 6,000 BC, spread throughout North Africa and the Middle East. It’s estimated that dates were first cultivated in southern Iraq circa 4,000 BC.

In many locations, dates were the difference between life and death: Some of the earliest Arabian nomads would only settle in locations conducive to growing the fruit. Dates are a concentrated source of calories, and easily transported and dehydrated: These characteristics made them a critical source of sustenance by which to survive the harsh desert conditions. Despite limited food choices, nomads were reputed to be some of the healthiest, as they often ate up to 6 pounds of dates a day. Mohammed himself was rumored to survive on only dates and water for long stretches of time.

Date palms were valued not just for fruit, as they also provided weaving and housing material, livestock feed, medicine, and shade. Even today, Saudi Arabia has the date tree as a national emblem to stand in tribute of the tree’s incredible versatility. Before the oil boom, date harvesting was a central part of the Middle East’s economy. Even in 2009, the top producers of dates were Egypt, Saudi Arabia, Iran, the United Arab Emirates, respectively.

Since ancient times, date expansion coincided with the spread of Islam to Southern Spain and Pakistan. Other cultures revered the date as well: The fruit appeared on several building carvings, shields, and the weaponry of Greece, Egypt and Rome. Even the Code of Hammurabi issued laws pertaining to the sale and distribution of dates.

Though dates did not share the same cultural significance in ancient India as it did in the Middle East, date palms have been growing in the arid climates of west India for eons. Some botanists widen date’s origin to encompass the region from Senegal to India.

Dates came to the New World by way of the Spanish explorers. In South America, Central America and the US, dates are still relatively new, as they’ve only been cultivated in these regions for the past couple hundred years. California first grew dates in 1890 after being introduced to the US by self-professed fruit bat David Fairchild.

Middle Eastern farmers have a saying that specifies date fruit’s growing condition: its feet in running water and its head in the fires of the sky. Indeed, dates require scorching dry summers, low humidity, no frost and ample sunshine. In Northwest India, flowering period occurs from February through March, and flower opening occurs from March through April.

India grows roughly 40 to 50 varieties, which are either categorized as soft or dry. Examples of important soft varieties include Medjool, Shamran, Hayany, Halawi, Saidy and Kalas. Commercial types of dry dates include Deglet, Thoory, Zahidi, and Dayri.

Because India is unable to grow enough fruits to meet demand, the country is the world’s largest importer of dates. 2011 figures show that India bought an estimated 256,000 metric tonnes, a figure roughly 40 percent of the dates offered on the world market.

Where to find Dates in India
A handful of the 600 varieties of dates hit the shelves in India year-round, and the fruits are especially popular among India’s large Muslim population. Stores provide a dizzying array of fruits, from soft-flesh expensive Arabic dates to tougher Algerian varieties. Another rare variety of dates available in India is the Barhi, a type that is eaten fresh and is still attached to the vine: These dates are crisp and mildly juicy as opposed to chewy and sticky.

The quality of dates, however, varies greatly. Dates imported from Egypt, Saudi Arabia and the United Arab Emirates are of the best quality, whereas those packaged and sold locally tend to be the least palatable. When it comes to purchasing dates in India, remember the old adage, “you get what you pay for.”

Checking for Ripeness in Dates
Ripeness depends on the variety: the most prized dates tend to have soft, chewy, melt-in-your-mouth flesh. No date—be it ones with soft or tough flesh—should have a dusty or dirty taste. This indicates poor storage, oxidation, and the dates have likely expired.

Avoid dates packaged in unmarked bags, especially if they’re sold as chopped dates. Very likely, the vendor is selling low-quality dates, or trying to pawn off expired brand-name fruits. Sellers also repackage poor-quality dates with other nuts and label it as trail mix. If the shop is well reputed and specializes in such goods, the dates may be fine. But if it’s a ramshackle shop selling mostly gum and fruit, do not buy them. The quality and hygiene are questionable.


The taste of dates depends on the variety. High-end dates have a chewy, soft texture with a taste resembling rich caramel. Other overtones include toffee and hints of coffee. A quality date should be sweet and dissolve in the mouth like fine sugar granules. The fruit’s overwhelming sweetness and richness means that few people can eat more than 3 or so in one sitting. Also like caramel, dates have a tendency to stick to the teeth. This may be painful to those with sugar sensitivity. 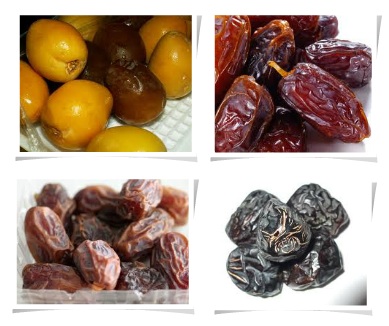 Barhi dates (upper left): You can find these fresh, like the yellow, or dried. They're the cheaper varieties here in India.

Ajwa dates (lower right): One of the most expensive dates in India, costing appx $14 per pound or, $30 per kilo.


Dates are mostly labeled "red" or "black" dates to encompass their general description and quality.

Nutritional Value of Dates:
According to the USDA nutrient database, 100g of Medjool dates is:

Health Benefits of Dates:
Dates have a unique, ideal ratio of sugar, fat, and minerals. A 2003 article published by the International Journal of Food Sciences and Nutrition explains how dates are one of the best foods for the future—they contain at least 15 essential minerals, 14 types of beneficial fatty acids, and a high percent of carbohydrates.

How to Open/Cut Dates:
To chop dates into fine pieces, use a paring knife to cut the fruit lengthwise and expose the long, hard seed. Remove the seed, and chop the date into the desired-sized pieces.

If adding dates to desserts, drinks, and smoothies, consider soaking the de-seeded dates overnight. This softens the fruits and makes it easier to blend them into smoothies or fold into batters.

Storage:
Keep dates in an airtight container and store in the refrigerator. The fruits will harden when cool, and this may deter anyone who enjoys soft and chewy dates. To restore their original texture, place dates in a bowl of warm water and wait for a few minutes before consuming.

In the freezer, dates last for a year. Although they will develop small ice crystals, they dissolve easily once removed from the freezer.

Dried dates require no refrigeration. Keep the fruits covered in a bag or stainless steel box to prevent accumulation of dust.

Date Recipe Ideas and Uses:
--Make stuffed dates by piping almond or cashew butter in the center of the fruit. Dip half of the date in chocolate for extra decadence.
--For a savory appetizer, make cashew cheese and slather it into a cut date. Serve with a toothpick.
--Mix chopped dates and apricot into rice dishes, as is common in Persian cuisine.
-Make date paste by heating chopped dates with water and mash. Use this paste in smoothies, ice cream and milk shakes. Or, use as the base for frosting on cakes and muffins. This paste can also be used in salad dressings and glazes, and pairs nicely with with balsamic vinaigrette and orange juice.
--Add dates to salads. The fruits work well sliced oranges, walnuts, pecans, berries, beets, and carrots.
--Use stewed dates as a sweetener for soups and chutneys.
--Mash dates with nut powder and use as the base for a raw vegan piecrust.
--Make a healthy vegan laddu by mashing dates with finely ground channa powder. Add cardamom, vanilla, salt, and chunks of cashew, pista and almond nuts. Roll into balls, and add more water or dates to improve the texture.

An American municipality, Dateland, Arizona, earns its namesake from the vast date palm fields spread across its otherwise desolate desert.

Posted by Catherine Reddy at 8:04 AM