All About Starfruit in India

Starfruit is a quintessential exotic fruit, with its waxy, golden exterior and tropical aroma. Its star-like pieces garnish many cocktails, and cakes. The fruit’s taste, however, may disappoint those looking for a bold and brash flavor to match the exterior. Carambola might look beautiful, but its vapid personality relegates the fruit to a novelty item and nothing more.

Origin of Carambola
Carambola is an ancient fruit with muddled origins. Since prehistoric times, it has grown wild throughout Southeast Asia. Based on its reference in early Sanskrit texts, some cite Sri Lanka and India as its native habitat. Most botanists, however, believe the star fruit’s true origin is Malaysia, Indonesia or the Molucca archipelago.

Carambolas arrived to Europe in 1598 by way of the Dutch traveler, Linschoten, who amusingly described the fruit as “a sour apple with ribs.” Shortly after, the aristocracy dined on the luxurious fruit in Europe’s haute restaurants. While the British settlers referred to starfruit as “Coromandel gooseberries,” the Portuguese adapted “carambola” from the Sanskrit name, karmaranga, which means, “food appetizer.” Some botanists claim the Portuguese carried carambolas from India to regions of South America and Africa, but this is difficult to validate.

Despite its prehistoric status, carambola is a relatively new fruit in many parts of the world—the Americas weren’t growing carambola until the end of the 18th century; Africa the 19th century; and Israel’s experiments began in 1935. Carambola’s short seed viability is the single biggest factor for its slow spread across the continents.

Today, the largest growers of carambola are Malaysia, Taiwan, Guyana, India, the Philippines, Australia, Israel, and the US’s Florida and Hawaii. 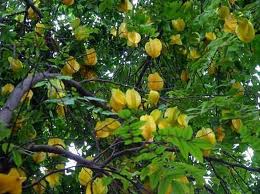 Availability of Star Fruit in India
Although India is one of the largest producers of carambola, it’s still considered a minor fruit crop. Indeed, most of the country’s trees are ornamental. Star fruits thrive in the hilly regions up to 1,200 meters in warm, moist climates. According to the book, “Minor Fruit Crops of India,” carambolas grow primarily in the southern states and along the west coast, extending from Kerala up to West Bengal.

India’s star fruit season is year round, although carambolas flourish during two particular times: September through October, and January through February. Owners of these trees enjoy a bounty of star fruits, as a single mature tree can bear up to 160kg per year. However, carambolas seldom appear in other markets because of their high perishability and a lack of centralized market coordination. Another limitation is shipping requirements: to withstand long distances, the fruits must be delicately packed and temperature-controlled. India’s cultivation efforts are also fragmented and decentralized, which result in unpredictable fruit quality and incredible variation amongst cultivars.

Where to find Carambola in India
It’s easy to find carambolas in the South during peak season. In rural areas, locals sell the brown-tipped, sun-kissed fruits on their blankets and purvey them along the road. The same vendors that sell semi-wild fruit like jamun and amla outside of schools will also be the ones lined up with starfruit. Not every grocery store offers carambolas--shopkeepers consider them a risky novelty fruit, much the same as durians or pomelos. Medium to high-end stores known for selling a variety of produce, however, will carry them. Outside of the fruit’s growing regions, carambolas are much harder to find. Few middlemen take on the risk of incurring shipping expenses for what’s otherwise a low-demand fruit.

Checking for Ripeness in Carambola
Ripe carambolas are golden yellow and have brown edges. Unripe fruits are lime green with hints of yellow, and taste sour. Avoid fruits with brown spots and a sunken, mushy consistency, as they’re overripe.

Carambolas will not continue to ripen once picked. While the fruits will grow more yellow, they will not grow sweeter. Most commercial fruits get plucked when they’re 50 to 70 percent yellow, but if picking for personal consumption, pick predominantly yellowish orange fruits.

Taste of Carambola
The Economic Times of India’s food writer, Vikram Doctor, jokes that the star fruit is a victim of the “Pretty Fruit Principle.” This theory holds that the best-looking fruits are often the least flavorful. Flashy dragon fruit with its mild, disappointing taste is another example of this principle.

Indeed, the star fruit is attractive but has an underwhelming profile. The taste of its crisp, watery flesh is slightly sweet at best. One description of the sweetest star fruit is “vaguely pear-like, with a mix of apples and citrus.” The smaller fruits in particular tend to be more tart and mildly astringent.

The texture of carambola resembles a grape’s: firm yet gelatinous, juicy, watery and hydrating.

Nutritional Value of Star Fruit
According to the USDA nutrient database, 100g of starfruit contains:

Several studies point to a number of other health benefits:
--A 2004 study published in the journal, Leibensmittel-Wissenschaft und Technologie found that the fiber-rich fractions of the fruit possess hypoglyceamic properties, and thus helps the body help control blood glucose levels.
--A 2006 study published in Food Chemistry found that starfruits are high in antioxidants
--A 2006 study published in Acta Farmaceutica Bonaerense indicates that carambola’s extracts have anti-ulcer properties on account of their ability to protect beneficial gastric mucosa.
--As per a 2009 study published in Evidence Based Complementary and Alternative Medicine, carambola has anti-inflammatory properties capable of remedying skin disorders
--A 2011 study published in the Journal of Ethnopharmacology reveals that star fruits have hypotensive benefits when tested in the aortas of rats.
--Birla College’s Department of Botany found that extracts fight e coli and staph infections, and thus display potent antimicrobial activities.

Patients experiencing renal failure should not ingest the fruit: A 1998 study in Nephrology Dialysis Transplantation found that patients on dialysis who drank star fruit juice had negative reactions ranging from hiccups, insomnia, mental confusion, and, in the case of one patient, death. 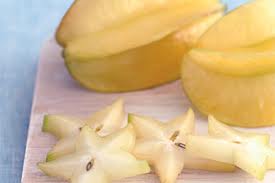 How to open/cut
The most common way to cut starfruit is like a cucumber: lay the fruit horizontally and cut into thin slices. Though carambolas have several soft seeds, they are perfectly edible and negligible in taste.

Storage
Submerge freshly picked carambolas in cool water immediately. Clean the fruits gently with a sponge to remove any dirt or residues that, if left on the fruit, invariably causes post-harvest rot or fungal infections.

Delicate star fruits must be wrapped carefully, ideally with wax or foam paper—if neither of these are available, wrap in a paper towel. Never place star fruits on top of the other, as they bruise easily. Transfer the fruits to cold storage no cooler than 5 C. They will keep for two weeks.

Carambola Recipe Ideas
--Add dried carambola to cereals and trail mixes. The fruits also double as a post-dinner mouth cleanser.
--For dessert, stew in sugar along with cinnamon, nutmeg, cardamom, anise and clove.
--Many in India use star fruit as a tamarind substitute
--Sautee carambola with tofu or other mock meats using a seasoning of lemon grass, ginger, garlic, green chili, and coconut oil.
--Decorate dishes and desserts with the fruit’s attractive, brightly colored star slices.
--Make carambola chutney by sautéing the pieces in oil and adding jaggery, fenugreek, mustard seeds, and chili. Transfer to a sterilized glass jar and refrigerate.
--Juice the fruit and add to other tropical fruit juices, such as guava, passion fruit, pineapple, kiwi, or mango. Blend with rum, coladas, or simply add to carbonated soda water.
--Add fruit slices to tropical fruit salads, serving with kiwi, banana, pineapple and mango. 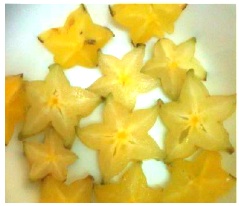 Random Fact about the Carambola:
Carambolas are used to polish metal on account of its high oxalic acid.

The plant genus Averrhoa is named after the Islamic theologist, astronomer and medic, Averroes (April 1126 – December 1198).  An asteroid discovered in 1973 is also named after him.

Posted by Catherine Reddy at 4:02 AM