Veganism draws all walks of life to its movement for a number of reasons. Some value the idea of a minimalist lifestyle while others find veganism enhances their religious practice. The guiding principles of veganism means there are multiple related philosophical, political and religious offshoots. Think of it like a Venn Diagram with all of these overlapping parts: 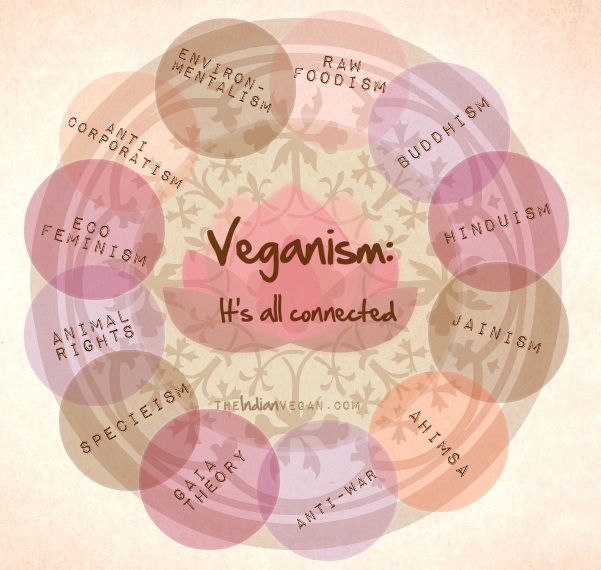 To go vegan, however, you do not have to adopt any of these beliefs or principles. In fact, you might disagree whole-heartedly with the tenets of the groups mentioned (I don’t agree with them all myself. Not by a long shot). But if you are drawn to the vegan movement, you might also want to explore these groups with overlapping interests. You might find these groups supplement your lifestyle beautifully; or they might not resonate in the slightest. Pick and choose as you desire!

Please note: this list is far from exhaustive. My descriptions are also merely surface overviews: no doubt there are more commonalities than the ones I list. Perhaps down the line I'll write a separate article on each point. If there are other groups or lifestyles that have key similarities with veganism, let me know and I’ll include a link.

Ahimsa: Term derived from sanskrit meaning, "do no harm." Its ties to veganism are obvious: vegans do not eat or use animal products as a way of practicing nonviolence towards living creatures.

Jainism: A belief system with a tenet stating that non-violence is a way of achieving higher consciousness and divinity. The Indian census estimates as many as 6 million Indians practice Jainism. Most Jains follow a vegan diet as per the text's teachings, in addition to shunning other foods including root vegetables, garlic, and other stimulating spices. Though many Jains are vegans, most vegans are not Jains. Some vegans do not adhere to the spiritual practice of Jainism and instead, practice other religious beliefs or none at all (ie, Christian vegan, Hindu vegan, or atheist vegan). Likewise, some Jains practice the spiritual teachings of Jainism but not always the diet. Sort of how some Hindus I know eat beef, some Jains I know consume dairy.

Hinduism: One daya, or belief, of Hinduism is that of compassion. This ties in well with veganism. Many Hindus are vegetarian, but still consume dairy as per their belief that cows are sacred creatures with its milk and ghee to be offered to the gods during poojas. Additionally, Hindus believe in a universal soul tying all things together as one. Some vegans eschew animal products for this reason as well--doing harm to animals goes against the daya of compassion, and doing harm to animals creates negative karma. For these reasons, veganism and Hinduism dovetail beautifully.

Buddhism: Veganism is also found in tenets of Buddhism. Buddhists have 5 precepts, 2 of which are immediately related to veganism: do no harm, and do not commit theft. Many vegans do not believe the lives of animals are ours for the taking; killing them is therefore a form of theft. Buddhists also believe in keeping thoughts and deeds pure, which includes eating foods deemed "pure." Meat is not considered a pure food. Many modern vegans do not believe meat is pure, albeit for very clear scientific reasons (RBH growth hormones, unsanitary conditions, etc).

Gaia theory: The belief that the experience of a human being is, to some extent, a reflection of the Earth's well-being. To put it another way, the Gaia theory purports that the planet continually (perhaps conscientiously, on a more spiritual level) self-replicates, regenerates, and acts in a way of self-preservation. Just like humans. The gaia theory ties in with Buddhism and Hinduism's belief of a singularity connecting all of us together. As it relates to veganism, a diet that improves the health of the planet is in accordance with the earth's ability to evolve for its own survival. The vegan movement is, therefore, a reflection of the earth's consciousness. It's as if human beings are cells on a body, and the Earth is the human; we just don't know it.

Speceism: Though the concept isn't new, the word first came about by British psychologist Richard Ryder in 1970. Australian animal rights activist Peter Singer took Ryder's concept and defined it specifically as, "a prejudice or attitude in favor of the interest of one's own species and against those of members of other species." Basically, humans exploit animals by eating them under the false belief that they are superior to animals. The ties to veganism are evident.

AnimalRights: Animal rights activists are guided by the principles that humans either 1) have a moral obligation to either be compassionate stewards of animals or 2) that the lives of animals are equal to those of human beings and should be treated as such. With either principle, many animal rights activists believe killing them for our consumption is amoral and exploitative. Not all animal rights activists are vegan, though. Under the first principle, some people believe that being a compassionate steward can still involve humanely killing the animal. Some activists argue humans need meat for a healthy diet; they just disagree with the status quo's industrialized farm factory system. Some also believe humans are superior to animals based on a person's ability to reason; but with that superiority, they argue, comes a moral obligation to look out for the welfare of otherwise defenseless creatures. This view obviously clashes with specieism, but can still coincide with veganism.

Ecofeminism: Eco-feminists believe that the exploitation of animals and the overall planet is fundamentally tied to the exploitation of women. In both cases, they are seen as resources to be controlled and dominated for man's will. Man has scientifically categorized the environment into heirarchies and orderly systems. Such specialized, technical systems often marginalize the intuitive and spiritual contribution of women: childbirth, for example, is reduced to a technical process created by man. The lives of animals are reduced in a similar fashion: they, too, are viewed not as creatures but as inputs for a male-dominated capitalist economy. The argument goes that by deconstructing these perceptions, we make both women and animals better off. According to some schools of eco-feminism, women bring long-ignored traits that benefit the earth, such as cooperation, empathy and collectivism. Some ecofeminists believe that integrating these traits and reducing traditionally masculine traits (again, mechanized, orderly, hierarchical thinking) in society brings positive change to the planet.

Environmentalism: Environmental activists strive to keep the eco-system healthy and in balanced by adopting a number of causes such as clean water, global warming, human rights and animal rights. Adopting a vegan diet reduces carbon emissions, saves water, and reduces the amount of land and food necessary to sustain the livestock industry. Many environmentalists also combat genetically modified food, a cause near and dear to many vegans because of food safety.

Anti-Corporatism: Some people go vegan to reduce their dependency on large, multinational corporations. Grievances against MNCs include perpetuating the use of sweat shops, abhorrent labor practices, exploitative factory farming, monopolizing the food supply, and backing dictators and murderous regimes at the expense of the public for ill-gained profits. Because a vegan diet often consists of freshly grown local produce and the lifestyle shuns goods made from animals, vegans often exclude products from MNCs as a natural but conscientious decision.

Anti-War: Anti-war activists (or pro peace, for the other side of the coin), protest against genocide, ethnic cleansing, civil wars and other conflicts involving the death of humans. The link to veganism is evident; boycotting the death of animals induces many to protest the needless waste of human lives. Furthermore, many anti-war activists point to the exploitation of people with a lower socioeconomic status to serve as pawns (ie, soldiers) to benefit the financial standing of the elite. Vegans draw parallels of animals being exploited for the gain of those with greater power (ie, humans).

Rawfoodism: For reasons they cite as optimal health and environmental reasons, raw foodists abstain from eating foods cooked above 120 degrees. This naturally excludes bread, grain, rice, etc. A raw foodist's diet is primarily fresh fruits, nuts, seeds, sprouts, seaweeds and vegetables. A raw foodist does not necessarily adhere to a vegan lifestyle (ie, a raw foodist might wear a leather coat), but others are raw vegans--they adopt a raw diet and a vegan lifestyle.

Posted by Catherine Reddy at 5:03 AM