I took a traditional Spanish soup and made it into a vegan South Indian gazpacho soup instead. How? Coconut chutney!

As I mentioned in my zucchini recipe, I’m a lazy cook. I shouldn’t even call myself a cook, actually—I grab what’s in my veggie-filled fridge, experiment, and hope something turns out well. Today in my fridge I had enough to make a pretty tasty vegan soup!

I also used some coconut chutney from the fridge as part of my Sangeetha leftovers. If you want to make it yourself, here’s a recipe. Truthfully I think it’s easier to go out and buy some… but it’s your call.

Pour the chunky, blended soup into a bowl. Stir in those cucumber slices and top with the red onions. Eat and feel invigorated. 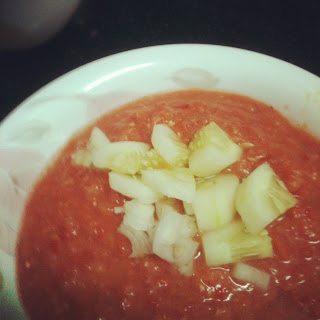 Like my other vegan soup recipes, you can modify this recipe in a zillion ways. Food purists will cringe when they see that my version of gazpacho includes only tomato, cucumber and onion.

Other things that you can (and probably should) add include red capsicum, garlic, chives, celery, parsley, vinegar, olive oil, lemon juice, ground pepper, and sugar. Any or all of these things will go well in the soup.
Posted by Catherine Reddy at 7:07 AM