All About Bentham's Cornel

All About Bentham’s Cornel
Bentham’s cornel’s unusual appearance resembles raspberries and lychee. Though not related to either, its cousin is the Szechuan strawberry, also known as “Kousa dogwood”.

Origin:
Bentham’s cornel is native to Western China, Bhutan, Northern Myanmar, and India’s lowlands along the Himalayas. In 1825, the tree came to England from Nepal, at which point the British christened the fruit, “Himalayan flowering dogwood.” The name “dogwood” has mysterious origins: some say it’s because the bark cured dog mange. Others believe it derives from the dagger-like appearance of the shrub, and evolved from “daggae” to “dog” wood.

Today, the trees grow in Europe, New Zealand, parts of Australia, and the warm, coastal regions of the US. In Australia, the plants are considered mildly invasive.

Availability of Bentham’s Cornel in India
Bentham cornel’s bright flowers appear in the summer. The fruits ripen in the fall, but cold weather adversely affects the flavor.

Where to find Bentham’s Cornel in India
The best bet of finding Bentham’s cornel is by taking a hike in the Garhwal Himalayas during the fall or early winter season. If trekking during the summer months of June and July, the tree’s gorgeous whitish-purple flowers will appear, but none of the vibrant pink berries will be present.

Some villagers in Hilli Haridwar, Kanshipur, Pauri and Srinagar may purvey Bentham’s cornel in round wicker baskets, but generally, the birds get to the fruit before the sellers.

Checking for Ripeness in Bentham’s Cornel
When ripe, the fruit’s skin is bright pink to dusky mauve. The sweetest fruits will be those that fall when the branches are shook. Avoid eating fruits found on the ground, as they may be insect-ridden and spoiled. Additionally, the fruit ferments quickly and leaves a pungent odor in its wake.

Ripe Bentham’s cornel has orange yellow flesh with a soft, creamy pulp similar to a banana’s. Unripe fruits, on the other hand have whitish-orange skin, and hard white flesh.

Taste of Bentham’s Cornel
The taste of a Bentham’s cornel depends on a number of factors, such as elevation and temperature: The fruit is usually mild in flavor, but unpredictable in its sweetness. Accounts of Bentham’s cornel range from bitter and inedible, to bland. Others claim it resembles delicious custardy bananas, or that it tastes like “apricot baby food.”

Bentham’s cornel has many small, guava-like seeds coated within its gooey, yellow flesh. These must be spit out.

The skin is tough, sandy, and granular with a hint of bitterness. Most prefer not to eat the skin, though it is edible. 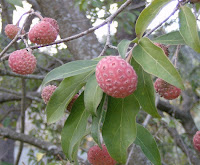 
No analysis appears to have been conducted on the fruit.


The Department of Applied Biological Sciences in Saga, Japan found ellagic compounds and iridoids within the tree’s root cultures. Ellagic compounds have antioxidant properties known to inhibit the DNA from binding to carcinogens. These compounds also reduce oxidative stress, combat aging, protect the heart and are anticancerous. Bentham cornel’s alter ego, the strawberry, is another example of a fruit containing ellagic compounds.

How to Open and Cut:


To consume only the pulp, cut the skin using a blunt spoon and scoop out the sweet flesh. Bentham’s cornel will require de-seeding for any culinary uses. To remove the seeds, scoop out the flesh. Add a small amount of water to thin the pulp, and then press the mixture through a coarse strainer.

Bentham’s Cornel Recipe Ideas and Uses:
--Serve the mashed pulp with sugar, vanilla as a pudding. This parfait creation can be layered with jams, nut butters and other fruit compotes.
--It can be made into jam, but expect to spend ample time deseeding the fruit.
--Fold into ice cream batter
--Mix with bananas for a raw vegan custard pie filling

Note: avoid heating Bentham’s cornel, as this will increase the pulp’s bitterness. 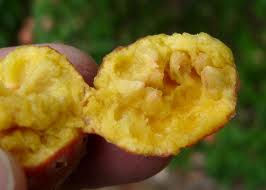 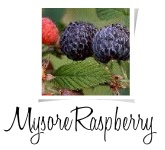 Posted by Catherine Reddy at 10:31 AM