All About Goji Berry

Origin of Goji Berry
Goji berry’s native region extends from Southeast Europe to Southwest Asia. The most educated guess as to the fruit’s precise origin is China’s Ningxia region.

Himalayan civilizations have relied on goji berries as foodstuff, and they have been cultivated and naturalized along the India-China-Tibet borders for thousands of years. Despite growing on Indian soils in these remote regions, India’s cookbooks and medical records do not reference goji berries nearly as extensively as China and Russia.

Author Shiu-Ying Hu explains in the book, “Food Plants of China,” that some of the country’s earliest poems, books, herbals and songs reference goji berries. Indeed, the fruits have been used in Chinese and Russian herbalist medicine for centuries, and refinement of the genus’s two most well known species is owed entirely to China. Even today, Ningxia has the best goji berry farming techniques and technology.


Goji berries have made waves in the import and export markets of India, but they’re not cultivated commercially on the country’s soils. However, there’s ample potential, given the ease of growing them: Several edible species in the Lycium thrive in a range of conditions—they grow alongside desert shrubs and snow-covered pine. Indeed, goji berries love hot summers and mildly cool nights; conditions found in many parts of India. Once established, the fruits are drought tolerant and the plants withstand frost with ease. Furthermore, goji berries begin fruiting within a year of planting.

Where to find Goji Berry in India


Fresh berries are nearly impossible to procure in India, but it’s possible to find dried goji berries in niche specialty markets catering to expats and health food junkies. One may also find goji berries in the online portal, PlaceofOrigin.com. Anecdotally, the dried berries tend to be more expensive in India than in the US. Though shipping costs are lower in India due to its geographical closeness to China, less competition and lower demand keep prices high. 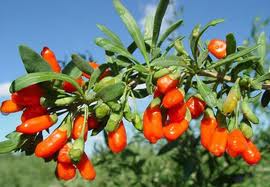 Checking for Ripeness in Goji Berry
Fresh goji berries are ripe when they can be shaken off the bush and collected from the ground. It’s best not to pluck them from the shrub, else they’ll oxidize and become sour and bitter.

Dried goji berries are best when their color is bright red and the fruits are soft and pliable. Though goji berries are naturally tougher than raisins, they shouldn’t be desiccated and tough to chew. Also inspect the package for any dust or dirt settled on the berries, as this indicates poor packaging. Check the package for the manufacturing date as well, given India’s notoriety for selling expired products.

Also, research the company beforehand. Chinese goji berries might be packed with pesticides and toxic residues. Though goji berries may provide ample health benefits, they could be mitigated by overuse of herbicides and pesticides.

Taste of Goji Berries
The taste of fresh goji berries is sweet with a pungent, bitter flavor on account of their seeds. Others compare the fruit as a cross between an orange and tomato, with its metallic, peppery bite and rose aftertaste. Goji berries are not juicy, and the fruits have a paste-like interior inside of their thick skin.

Dried goji berries have a hint of sour and the sweetness of carrot, which is to say, not too sweet but noticeable nonetheless. They also taste like sun-dried tomatoes; unsurprising, given that both fruits come from the nightshade family. 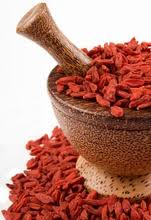 Nutritional Value of Goji Berries
The nutritional information of goji berries per 100g of edible (dried) fruit is as follows:

Health Benefits of Goji Berries
Goji berries have a number of health benefits that have been exploited by societies for thousands of years. Traditionally, the Chinese have used goji berries as a tonic for the kidneys, liver, and eyes.

Studies today affirm these benefits, and several others:
--A 2013 study published in the International Journal of Biological Macromolecules shows that certain polysaccharides in goji berries inhibit the proliferation of human liver cancer cells.
--A 2013 study conducted at the University of Hong Kong found that goji berries reduce oxidative stress and may be beneficial in managing glaucoma. This finding contributes to other assertions made by the study’s authors that the fruit’s carotenoids and zeaxanthins reduce the risk of macular degeneration and protects vision.
--A 2013 review published in the International Journal of Biological Macromolecules summarized studies related to goji berry’s biological activities. The researchers concluded the fruit to be an antioxidant, immunomodulation, antitumor, neuroprotective, radioprotection, anti-diabetes, hepatoprotective, anti-osteoporosis, and anti-fatigue.
--A 2012 study published in the Journal of Ethnopharmacology found that goji berry polysaccharides protected mice liver from oxidative stress and necroinflammation.
--According to a 2012 study published in Inflammopharmacology, goji berries have an apoptotic and antiproliferative effect on cancer cell lines. They also enhance the effect of other cancer therapies, with no known adverse side effects. This finding confirms another 1994 study published in the Chinese Journal of Oncology that the antioxidants in goji berries might fight cancer and boost the efficacy of cancer treatments in tandem with other regimens.
--As per an article published by the Univeristy of Texas El Paso, the goji berry’s two compounds, beta cysterol, and superoxide dismutase, protect the body from free radical damage, block cholesterol absorption, decrease the risk of heart disease, and lower inflammation.
--A 2010 study published in the Chinese Journal of Integrated Traditional and Western Medicine found that goji berries enhanced learning and memory capabilities when tested in manganese-poisoned mice.
--A 2012 study published out of the University of Hong Kong’s Eye Institute found that goji berry polysaccharides exhibited strong neuroprotective benefits.
--A 2011 study published by the University of Hong Kong found that goji berries have promise in combatting depression based on its neurological effects on rat brains.

Note: Though goji berries are generally safe for consumption, they do have blood-thinning properties. If on blood thinning medication, consult a doctor before consuming large quantities of the fruit.

How to Open/Cut:
Goji berries are typically consumed like blueberries, raisins and raspberries: whole, and popped in the mouth. The small, hardly discernible seeds require no removal.

Some choose to soak dried goji berries overnight to plump them and to restore their moisture. Soaking is advisable if using the berries for soups, syrups, smoothies, and in any blended concoction. Removing the seeds for cultivation is also easier if the fruits are soaked beforehand. Consume all soaked goji berries within a day: They spoil rapidly.

Storing Goji Berries
Fresh goji berries are highly perishable once plucked. Place the fruits in a clamshell container lined with a paper towel and store in the refrigerator. They will keep for up to a week.

Keep dried goji berries in a sealed container in the refrigerator or the freezer. The chilled air prolongs their shelf life considerably, and the fruits will keep up to three years. When ready for consumption, remove the fruits from cool storage and keep at room temperature for an hour—the flavors will be more robust.

Goji berry juice should be kept in the refrigerator, especially after opening. Most juices have a lifespan of roughly 30 days.


--Make a goji berry soup: Soak the dried fruits overnight. In a saucepan, sauté onion, garlic, chili, tomatoes and the goji berries. Add other warm spices like cumin, turmeric, pepper and cinnamon. Pour vegetable stock over the base, and simmer. Blend the concoction and serve with a dollop of cashew cream if desired.

Note: Though goji berries generally have sweet pairings, their hints of tomato make them suited for earthier spices like rosemary and oregano.

Random Facts:
One book I skimmed called “The 150 Healthiest Foods on Earth” explained that some scientists think goji berries are not the same thing as wolfberries (the fruit that is packaged and distributed to us under the name of goji berries). Goji berries, one scientist explains, grow near Tibet and are cultivated organically, whereas wolfberries are loaded with pesticide residue and are grown throughout China.

Posted by Catherine Reddy at 2:23 AM