All About Limes of India


Several types of limes originate in Southeast Asia, including regions of India.  Limes actually predate lemons, as the latter is a hybrid between citron and lemon. And, as is true with lemons, limes were growing in abundance throughout Southeast Asia when the Arabs came and introduced them to other parts of Egypt and Africa.

Availability of Limes in India
Different varieties of the tart fruit grow throughout India, from the base of the Himalayas in the north, to the palm tree swaying state of Kerala. India also exports many of its dried limes to Iraq, mostly for use in beverages.

Acid lime, or, kargzi, is one of the most common lime cultivars. In English, it’s known as the Mexican lime, or, key lime. The states growing acid lime include Andhra Pradesh, Tamil Nadu, Maharashtra, Gujarat, Rajasthan, and Bihar. Within the acid lime group, there are four varieties of importance in the south: vikram, prumalini, PKM and sai sharbati.

Makrut is another well-recognized variant, most notably for its bumpy, ridged skin. Its aromatic leaves are a staple in several Southeast Asian cuisines, and regions across the continent use its pungent leaves in curry dishes.

The Tahiti lime, or, Persian lime, is a type of lime thought to originate in northwest India. These limes are small, bright, zesty and juicy. Most opt to pick the fruits prematurely when small and bright green, as this is also when they are most flavorful. 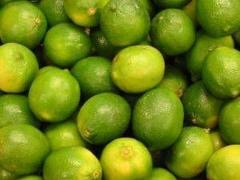 Where to find Limes in India

Checking for Ripeness in Limes
The best limes are aromatic and have a waxy bright skin. The skin color depends on the variety. While some acid limes are pale to golden yellow, Makrut limes are green throughout their bumpy texture. Thus, the best indicator is aroma and the quality of the skin. Buy limes heavy for their size and that yield to the touch: Hard limes indicate dryness.

Taste of Limes
Limes are bright, fresh, astringent, acidic, tart, puckering, and zesty. The ratio depends on the lime’s subgroup: acid, or sour. Acid limes do not have the same mouth-puckering quality as the sour types, but they still provide the same bright, astringent quality common to all limes.

Limejuice in its raw state overwhelms taste buds with a sharp, refreshing citrusy flavor. Unlike oranges and kumquats, the fruit has no hint of sugar: Few consume whole limes out of hand. Some variants, however, are more subdued in its puckering bite than others—such is the case with the small marble-sized limes placed atop beverages.

Limes also have a much stronger, acidic bite than an orange: For this reason, simply adding sugar to a lime would in no way replicate the taste of an orange. 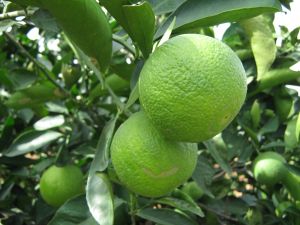 Health Benefits of Lime
Lime is a staple in Ayurveda. According to the book, “The Ayurveda Encyclopedia,” lime’s energetics is sour, and slightly bitter, cold, and sweet. Its juice is a digestive stimulant; its peel is a stomachic, expectorant, and stimulant. Lime combats the negative side effects of alcohol (which is, perhaps, why its often served alongside tequila), fights malaria, and its peel stimulates the liver.


*Contrary to the advice of consuming high vitamin C when experiencing a cold, the book advises against lime consumption during this time. 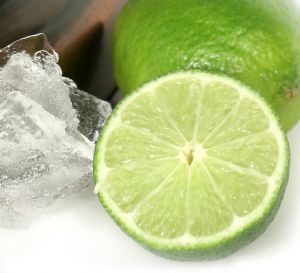 *Note: one folk remedy for biting insects is the topical application of lemon juice. However, lemon juice may cause rashes and other skin problems—use caution when applying the juice.

How to Open/Cut Lime:
To extract the lime’s juice, first roll the fruit along a hard surface with the palm of the hand. Then, cut in half and squeeze. If the lime is large, cut into wedges and squeeze. If a large quantity of juice is necessary, skin the fruit, de-seed, blend, and strain in a sieve. Or, use a juicer.

To zest the lime, lightly rub a zester against the peel of the lime. Rotate the lime while grating to evenly remove the skin. Avoid zesting the bitter white pith, as the flavor is most concentrated in the rind.

Only those with strong knife skills should extract the peel using a knife: Otherwise, stick with a zesting tool or a micro grater.

To slice the lime into thin circles, take a sharp knife, lop the end of the lime, and cut into thin slices.

To make a lime garnish, make thin circles using the slicing technique described above. Cut from the center at the fruit’s radius to its skin. This will cause the lime to perch easily on the rim of any glass, or, upon twisting the fruit, will cause it to sit well on any plate. 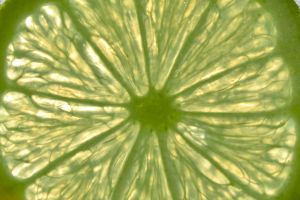 
Store limes in the refrigerator. They will keep for up to 10 days, but their freshness diminishes over time. One way to prolong their shelf life is to submerge whole fruits in water and store in the fridge, where they will keep for three weeks. Limes prefer relative humidity of at least 85 percent, and a temperature that does not dip below 7C.

Main Course
--As is axiomatic for chefs preparing Asian meals, use limejuice to balance the acidity and fat in any curry and fry. Also use limejuice to reduce the sweetness of a dish with too much sugar.
--Add lemon leaves to green coconut curries: use a base of coconut milk, green chili, lemongrass, basil, cumin, soy sauce, ginger, garlic, onion, coriander, and shallots. Add vegetables such as green and red capsicum, carrot, firm tofu, shredded basil, zucchini, green beans, and raw mango.

Sweets and Desserts
--Use limejuice for any jam recipes, particularly tropical fruit preserves. Lemon is a better flavor choice for most continental and European fruits.
--Make lime sorbet, adding complementary flavors such as coconut or mint. Or, throw in some star anise for a more unconventional flavor.
--Use limejuice to make creamy Key lime pie. Make a filling of blended butterfruit (an adequate substitute is a mix of coconut oil, ground cashew powder, and silken tofu), coconut oil, limejuice, arrowroot powder, lime zest, jaggery, and coconut milk.

Additional note: Several Indian food restaurants serve each guest a steel bowl with warm water and a cut lime once the meal is finished. Because eating with the right hand is customary, guests use this “finger bowl” as a hand wash—the lime cuts through any grease or oil from the food quite effectively.


John Richard Bowen explains in the book, “Muslims through Discourse” how in certain sects of the Muslim faith, the lime—specifically Makrut—is used to expel evil spirits from the body. Upon exorcism, the jin gets transferred from the body to inside the fruit. The Hindu faith has a similar belief; thus, people hang limes over the sick to rid the area of evil spirits that might be instigating the illness.

Lime’s role as a cleansing agent dates as far back as Adam and Eve, when the fruit was called upon to cleanse the diarrhea expelled after they ate the forbidden fruit. The growth of the Makrut tree may also foretell an engaged couple’s happiness in marriage.

The phrase “kaffir lime” deserves a second review. Unbeknownst to most Westerners, “kaffir” has racist connotations in Europe, Africa, parts of Asia and the Middle East: some use the word in a derogatory fashion to indicate a “nonbeliever of Islam,” or an infidel. It’s also a negative word issued to a black person, most often used in South Africa. One foodie article from “Vanilla Garlic” explained that using this name is the same thing as using the colloquial phrase for Brazil nuts, which were once called “n--ger toes.” 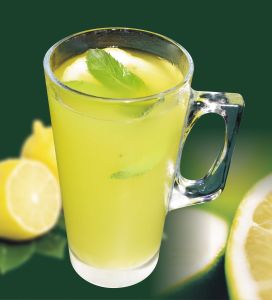 Posted by Catherine Reddy at 7:37 AM