Although loquats are not popular in many countries, they are beloved fruits in China and Japan. In these cultures, legends and mythology surround its origins. For example, Chinese lore holds that loquats stemmed from the base of a waterfall. When a carp ate the fruit, it transformed into a dragon. The royal family, seeing the miraculous powers of the fruit, forbade anyone but the family from eating loquats.

Origin of Loquat
According to the Encyclopedia of Fruit and Nuts, the fruit was brought from Japan to China, although others contend that it’s the other way around. Records show that the fruits were present on Japan’s soils as early as 1100AD. Etymology complicates the debate: The Japanese used to call loquats with a name resembling its Chinese term, “biwa;” indeed, during the Tang Dynasty from 618 to 907, loquats were called “Tang biwa.”

The fruit spread to other countries by way of German physician and botanist Engelbert Kaempfer, who recorded his loquat sightings in Japan in his book, Amoenitatum Exoticarum in 1712. By 1784, loquats were sent to gardens in Paris and, a year later, in London. After loquat’s arrival in these key cities, the fruit spread to the Mediterranean and parts of Northern Africa.

Though Loquats are naturalized in India, how the fruit ultimately came to its soils is a mystery. Most sources claim that the fruit didn’t arrive until long after the US had received it around 1870; however, the 1857 publication, “India Under the British Empire,” references loquat as already being present. Given Afghanistan’s long-standing love affair with the fruit, perhaps loquats arrived by way of the Muslim rulers in the north.

Today, China continues its strong interest in loquats, and the country grows over 100 varieties within its borders. According to a 2003 report published by the International Centre for Advanced Mediterranean Agronomic Studies, China produces the most fruits in the world, followed by Japan, Pakistan, Israel and Egypt. The most important cultivars are Tanaka, Algene, and Golden Nugget.

Availability of Loquat in India
A Purdue horticulture article explains that at least 14 varieties of loquat are cultivated in India: all vary in their quality, size, shape, acidity, sweetness, flesh consistency and toughness of skin. The poorer quality fruits sell for jam and preserve processing, while the higher qualities get transported fresh. The trees grow up to 5,000 ft. in elevation all over India.

Some of the regions cultivating loquats are Uttar Pradesh, Delhi, Punjab, Himachal Pradesh, Assam, Maharashtra, and a few of the hill stations in the south.

Loquat season in India is in the spring, beginning in mid-March and lasting through May. 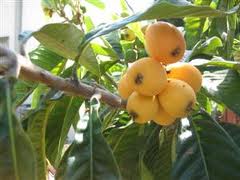 Where to find Loquat in India


Because loquat is one of the only fruits in season during this time of year, many vendors purvey the fruit. They are easily found during the spring and early summer months in shops large and small.

Checking for Ripeness in Loquat
Loquats are aromatic when ripe, possessing a fruity, distinct smell. Though the Japanese sell very carefully wrapped white loquats free of blemishes, Indian loquats sold in the dusty markets tend to be mottled. Do not let these marks be a deterrent: like mangos, sometimes the spotted ones are the sweetest. Steer clear of green loquats, as they are under ripe and thus quite acidic. Also avoid fruits with cuts, wrinkles, or small pit marks. A good loquat should have the stem still attached to the fruit, as removing it hastens decay.

Do not use color as a gauge of ripeness, as it varies depending on the cultivar. Some fruits are white, others golden, and some loquats are reddish orange. Go by feel and scent instead—opt for a floral aroma with hints of apricot and cherry, and pick smooth-skinned loquats that give slightly to the touch. 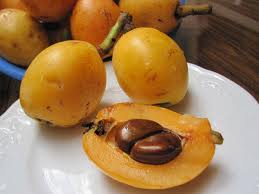 Taste of Loquat
Loquats vary in texture, but the ideal dessert fruits have pulpy, juicy sweet flesh reminiscent of peach and apricot’s floral sweetness, and persimmon’s mildness. As its other name, “Japanese plum” suggests, the taste is a mix of plum, peach, and apricot. Loquats are not acidic, nor are they sour except some of the pulp near the bottom. Some describe loquat like a pear, but with a tropical taste resembling a mango. Others are unimpressed by the fruit’s mellow, understated simplicity.

The fruit’s texture is firmer than a pulpy apricot, and better resembles a plum’s.

When cooked, the sugars concentrate, and loquat’s taste becomes similar to a fig’s.

If underripe, however, loquats taste sour and hard.

Nutritional Value of Loquat
According to the USDA nutrient database, the nutritional analysis per 100g of edible loquat is: 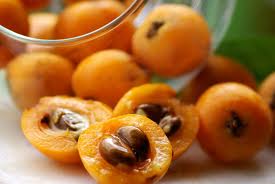 Health Benefits of Loquat
According to the book, “Ayurvedic Curative Cuisine for Everyone,” loquat fruits positively affect the endocrine system, digestive, immune and respiratory system. Loquats are also used for their sedative properties ability to halt vomiting.

Many scientific studies report promising findings on loquat’s medicinal potential:
--A study by scientists in Jordan published in BMC Complementary and Alternative Medicine found that loquat extracts has potential for use in cancer therapies due to its cytokine immunomodulation capabilities.
--A study published in the Food and Chemical Toxicology reports that loquat extracts offer considerable protection against memory impairment and neurological oxidative stress.
--The Journal of Ethnopharmacology published a report touting loquat leaf’s significant anti-inflammatory and analgesic qualities.
--A study published by the Phytotherapy Research states that loquats are a functional food for the prevention of diabetes and hyperlipidemia.
--The Archives of Pharmaceutical Research published a study stating the loquat’s leaves may be a valuable agent in the treatment of cancer metastasis.


--According to a study in The Journal of Natural Medicines, leaf extracts of loquat may protect the body against cellular aging.

How to Open/Cut:
Though the peel is edible—and should stay intact if preserving—most choose to peel the skin to expose loquat’s soft, fleshy pulp. One of the easiest ways to remove the skin is by blanching, or, boiling for only a few minutes. When taken off the stove, the fruits should peel easily. 2-3 large brown, glossy seeds in the center of the fruit require removal. Like other stone fruits, their seeds contain small amounts of arsenic.

If preparing many loquats for use in a recipe, dedicate ample time to the project: deseeding the grape-sized fruit is a laborious undertaking.


Loquats do not have to be stored in the refrigerator, but they should be placed in a cool area. In these conditions, will keep for ten days at room temperature. If the kitchen is notoriously warm and humid, opt for the fridge. In cool storage, loquats keep for almost a month.

Loquat Recipe Ideas and Uses:
--Make a preserve and use to top pancakes, cakes, ice cream and pastries. Because loquats have such a mild flavor, consider supplementing them with additional spices, such as cinnamon, clove or cardamom. Also, though loquats have some pectin, add more to improve the preserve’s consistency.
--Use in ice cream, but use supplementary spices to enhance loquat’s subdued flavor. Though loquats go well with warm spices, they can also pair with bright, cool flavors like mint and lemon.
--Like apricots and peach, cut, peeled loquats make a beautiful addition to tarts.
--Swirl into creamy batters for breads, yoghurts or cheesecakes: the fruit pairs beautifully with cheese and cheese-like flavors.
--Add loquats as a rambutan or lychee substitute in any Chinese cooking dish.
--Make loquat syrup by stewing the peeled, seeded fruit puree in sugar and water, reducing the concoction into a syrupy broth. Add vanilla and a pinch of salt.
--Bake loquats with nuts, sugar, garlic and onions, and serve atop rice and grain dishes such as tagine, biryani, and couscous. Baking does not require peeling the fruit.
--Poach the fruit with sugar and a cinnamon stick
--Add loquat to salsa recipes


--Make loquat soda by first peeling loquats and deseeding them. Use a juicer to extract the pulp and juice, and then boil with sugar. Strain the concoction through cheesecloth, and refrigerate. Add carbonated water and ice. Note: if desiring a more tart, tangy flavor, leave the skins on some of the fruits.

Random Facts:
In Ancient China, some brothels were called “the gate of the loquats.”


Loquats are part of the pome family, and are thus related to pears, quinces and apples.

Posted by Catherine Reddy at 11:46 AM