All About Indian Almond

Availability of Indian Almond in India
Indian almonds grow throughout the warmer regions of India, including Maharashtra, Karnataka, Tamil Nadu, Andhra Pradesh, and Kerala. The tree also grows in West Bengal and other warmer regions in the North.

Indian almonds bear fruit during the winter months in India. 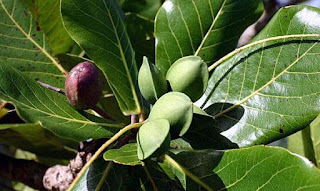 Where to find Indian Almond in India
Indian almonds are usually sold pre-shelled and packaged; rarely fresh. Shelled nuts are easily found in most every decent-sized nut and seed store.

Checking for Ripeness in Indian Almond
Indian almonds display a vibrant spectacle of colors as they ripen: green at first, then changing to yellow, and finally a deep red or sharp magenta. Some greenish varieties go from dark green to brown.

Indian almonds may be collected from the ground if recently fallen, by hand, or with use of a long pole for pruning. 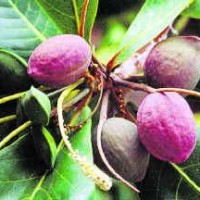 Taste of Indian Almond
Indian almonds have a nutty taste similar to almonds thanks to its oil content, and are considered important foodstuff in Vanatu. Villagers sometimes eat the aromatic fleshy fruit, though the taste is not particularly pleasant or noteworthy. Sometimes the fruit tastes sweet; other times bitter. The ever-resourceful Filipinos occasionally make wine from the fruits.

Nutritional Value of Indian Almond
According to an analysis conducted by the University of New South Wales, Indian almonds contain the following nutrition per 100g: 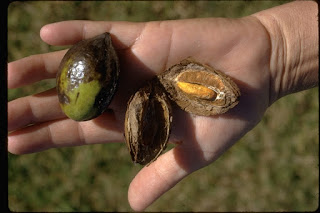 Health Benefits of Indian Almond
According to the book, “The Encyclopedia of Fruit and Nuts,” the leaf extract from Indian almonds have been used traditionally to sickle cell anemia and boost liver function. Additionally, the oil from the leaves treat skin problems when applied as a salve. The seeds are believed to treat liver cancer and act as an aphrodisiac. The dried root has been used for their effective antimicrobial activities against e coli and staph outbreaks.

Some of these traditional remedies have been affirmed by scientific studies as well:

How to Open/Cut:
Some Indian almonds can be cracked opened with the teeth. Others require cracking open with a knife or hitting with a stone.

Extraction is a cumbersome process, but the nut requires no additional processing in order to consume. 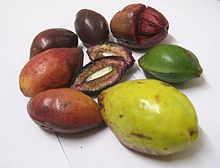 Storage:
Fresh nuts grow moldy at room temperature in a day or two. Preserve the life of the nuts up to a year by roasting them.

Indian Almond Recipe Ideas and Uses:
--Substitute any recipe calling for almonds with Indian almonds instead
--Sprinkle in any rice dishes or salads
--Make a smoky badam treat by grinding the nuts and adding syrup or mashed dates.
--These trees serve as great windbreakers and offer coastal protection
--Indian almond trees are good for wildlife, including precious honeybees.
--The trees also provide shade for other trees, such as cacao trees.
--Because the trees have a long life of 60 to 100 years and fruit early, many select Indian almonds as an ornamental tree. 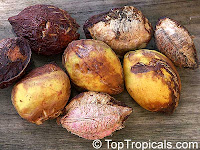 Personal Experience:
Indian almonds don’t get much notice in urban areas. My mother-in-law and I walked past one Indian almond tree on the way to the store—I only noticed because the ground was littered with gorgeous magenta pods. No other passerbys seemed to care too much about these colorful fruits.

Random Facts:
In Vanatu, these dried and processed nuts sell for a whopping $80/kg in urban supermarkets. 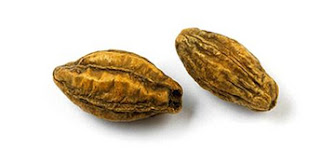 Posted by Catherine Reddy at 2:43 AM