All About Nutmeg and Mace

Nutmeg may look humble on the outside, but opening its woody fruit reveals a vibrant orb prized for its earthy flavor and unmistakeable essence. Like many spices, nutmeg has a long history steeped in trade wars, national imperialism, and rugged exploration.

Origin of Nutmeg
Nutmeg’s origin is, fittingly, the Spice Islands of Indonesia. This simple spice, along with nutmeg and clove, was a cash cow for any nation that seized control. Thus, the tiny island and the Malukans were subject to the trading, conflicts and bickerings of Portugal, Britain, the Dutch, Spain, and the Arabs.

Today, India is a main nutmeg producer but comes nowhere near the volume of with Indonesia and Grenada. Other countries growing nutmeg include Papua New Guinea, Sri Lanka and a few Caribbean Islands. Interestingly, India is a primary importer of nutmeg as well. 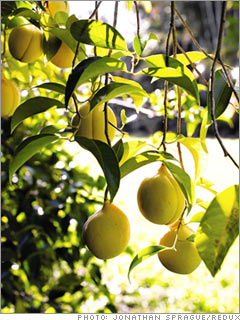 Availability of Nutmeg in India
Though it takes nine years from seed to fruition, Indian farmers in Kerala and Tamil Nadu have a bounty of nutmeg trees yielding high prices. Main production is in the Angamaly-Kalady belt in Kerala. Other regions that grow nutmeg on a lesser production are Karnataka and the south of Maharashtra.

India only exports 10 percent of its crops, meaning a whopping 90 percent is sold for domestic consumption.

Where to find Nutmeg in India
Fresh nutmeg can be found growing commercially in Kerala and Tamil Nadu. Otherwise, it’s possible finding hanging nutmeg fruits from trees scattered around Maharashtra. Nutmeg needs to grow in regions providing fertile soil, and conditions like coastal regions that offer stable temperatures that seldom dip below 60F.

Otherwise, nutmeg spice and mace can be found year-round in most any grocery store. It’s also possible to purchase dried, whole nutmeg. A tough grater will be required if buying it in its whole form.

Checking for Ripeness in Nutmeg
When ripe, nutmeg makes its presence known by its bright red-streaked kernel peeking from the fruit. Its exterior is a creamy brownish yellow color. Unripe nutmeg is greenish-yellow with the kernel remaining firmly inside the fruit. 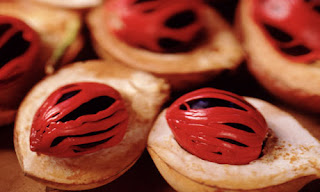 Taste of Nutmeg
Ground nutmeg has an earthy, nutty taste reminiscent of cinnamon without the sweetness. Detractors often substitute the description, “earthy” with “dirty.” To Westerners, nutmeg envokes nostalgia for Christmas, as this spice is often served in warm festive beverages like eggnog and apple spice cider. Just like achiote, nutmeg has a “warming” essence.

Mace—the red, leathery webbing of the black kernel—is spicier, bolder, less sweet and more peppery than nutmeg. Mace is also a bit citrusy thanks to its proximity to the fruit’s sour pulp.

The tough, fibrous fruit encasing the nutmeg kernel is not widely consumed, as it’s very sour, woody and slightly bitter. Keralans still manage to make dishes incorporating this part of the fruit, though, by making pickles from it for use in chutneys and curries.

Nutritional Value of Nutmeg
To be clear, a tsp of nutmeg (2g) contains a negligible amount of calories, fat, vitamins and minerals. The following is per 100 grams, which would cause a severely bad reaction if actually consumed: 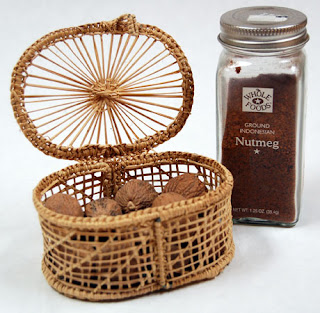 Health Benefits of Nutmeg
Nutmeg may look unassuming, but it’s filled with medicinal benefits. According to the book, “The Way of Ayurvedic Herbs,” this spice acts as a potent sedative. Because nutmeg has a delayed reaction of a few hours, the book advises adding poppyseed to hasten sleep with the nutmeg/milk blend. The spice also lowers blood pressure by slowing the pulse rate. Additional benefits outlined by the book include relaxant, improved digestion and aphrodisiac qualities.

When topically applied, the spice combats acne problems and has traditionally been used by Malaysians and Indonesians to fight stomach aches, headaches, stiff muscles and sinus problems.

Scientific studies reveal additional benefits:
--According to a study published in “Journal of Genetic Engineering and Microbiology,” nutmeg has potent antimicrobial and antibacterial properties, showing strong efficacy against microbes like staph. The authors of the study also point to its alternative medicine uses as a memory booster and anti-cancer agent.
--A 2012 study published in “Drug and Chemical Toxicology” found that nutmeg leaf extracts significantly combatted bone cancer cell growth.
--An article in “Evidence Based Complementary and Alternative Medicine” found that nutmeg exhibited strong antibacterial activities for various types of oral bacterias, thus showing promise as a dental health tool.
--A paper published for the “3rd International Conference on Biotenchnology and Food Science” touted nutmeg’s antiparasitic properties
--According to a study published in “Biological and Pharmaceutical Bulletin,” extracts from nutmeg aids skin health and protects it from UVB-irradiation, a process known to accelerate aging through oxidation.
--As per a study published in “Journal of Food Sciences,” nutmeg oil significantly reduced the number of colon cancer cells, thus showing immense potential as an anticancer agent.
--According to a study published in “BMC Complementary and Alternative Medicine,” nutmeg extracts significantly increased libido when tested in rats, also showing no adverse side effects or toxicity.

Too much nutmeg, however, can cause delirium. Anecdotal experiences written by others on the Erowid website describe sensations similar to those felt by consuming acid or MDMA, with a typical ingestion of 3-4tbsp. Be forewarned: an equal number of negative experiences are described, explaining symptoms of nausea, heart palpitations, dizziness, confusion, acute paranoia and anxiety, all of which may last for 30 hours or more.

How to Open/Cut:
Opening and preparing whole nutmeg from its raw fruit form is quite laborious. Once the mace and kernel are extracted, peel the mace from the back seed. Dry the mace in the sun for two weeks and the seed for a month or two, or, until the kernel can be heard rattling from inside the seed.

When the kernel is extracted from the seed, use a microgrinder or special nutmeg grinder to get the fine powder.

If desired, dry the fruit pulp for a few days until it’s leathery.

Storage:
If purchasing ground mace or nutmeg, store in an airtight container at room temperature, ideally in dry conditions. Whole nutmeg kernels keep for many years.

Store the leathery pulp and nutmeg kernels in an airtight container away from direct sunlight and at room temperature.

Random Facts:
Nutmeg used to be the base of love potions and other magical spells. Today, nutmeg is still used by some wiccans to give tribute to the divine and elicit luck, love and money.

George Washington’s wife specifically requested a “silver nutmeg grinder” be sent from England. Possessing such a kitchen accouterment back in the day (and affording exotic spices, for that matter) was akin to a person’s ability to afford the finest restaurant-grade espresso machine today.

Posted by Catherine Reddy at 3:46 AM