Origin of Lasura
Lasura originates along the Himalayan tract up to 1,500 metres, with its natural habitat extending through the forests of India, Nepal and Myanmar. Today, Cordia trees are found in Taiwan, Thailand, Malaysia, China, Polynesia, Australia.

Availability of Lasura in India
Lasura grows in moist and dry forests of the country, spreading throughout the northern states of Himachal Pradesh, Rajasthan, Punjab, Maharashtra, parts of the sub-Himayalan tract and the Western Ghats. Along with forests, Cordia trees prefer ravines and valleys for growing. Lasura is not as popular in the south of the country, but a single tree rests in Adyar’s Theosophical Gardens for those wishing to find one.

Lasura trees bear cherry-sized fruit from March through June in some parts of India, and July through August in other regions. 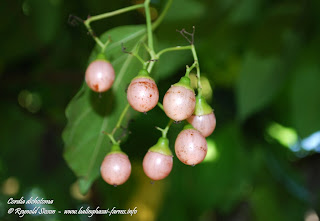 Where to find Lasura in India
Unripe lasura is easy to find when in season. This is because of its popularity in traditional dishes within Andhra Pradesh, Punjab, Gujarat, Maharashtra, Tamil Nadu and Himachal Pradesh. The unripe fruits transport well, making them prime for distribution to far-off markets.

It’s worth noting that the fruit has more recognition in the rural, traditional areas of India: a business executive in Hyderabad would not be able to recognize the fruit, but a person who grew up in the small Kangral district of Himachal Pradesh or in rural Mysore would be quite familiar with the berry-like drupe.

Ripe lasura is not a commonly sold fruit, most likely because of its difficulty to transport and its high perishability. When in season, children, birds and monkeys tend to be the greatest enthusiasts of the sticky pink fruit.

Checking for Ripeness in Lasura
Lasura is green in its unripe state, slowly turning tan if it’s Cordia myxa and a light baby pink color if it’s Cordia dichotoma. As it overripens and falls from the tree, the fruit turns deep purple. These deeper-colored fruits indicate overripeness and shouldn’t be eaten. 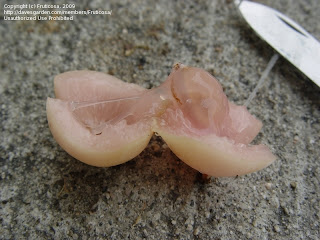 Taste of Lasura
Green, unripe lasura has a sour taste that can easily be confused for raw mango in its pickled form. Its tart, tangy flavor makes it an ideal candidate for additional preparation, such as sauteeing and marinating.

Tan or pink ripe lasura’s taste is simple but tasteful—its gelatinous, slimy, mucous-like flesh is sugary and unassuming. No other flavors round out the fruit, as it’s not tart, acidic, bitter, or astringent. If one can overcome the bizarre snotty texture, they might enjoy the taste. 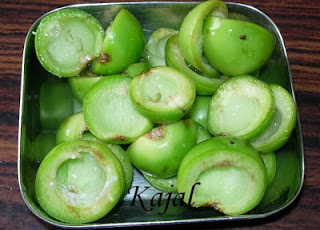 Health Benefits of Lasura
Cordia species have been used in medicinal remedies for centuries. According to the book, “Indian Herbal Remedies,” the man regarded as the father of surgery in India, Sushutra, prescribed Cordia fruits as a coolant and astringent, to be used for biliousness, cough and internal haemorrhage. The bark paste was used for treatment on spider bites and eruptive boils. In Unani medicine, the fruit supplemented purgatives as a way of counteracting their bad side effects. Other properties of the fruit include acting as a demulcent, expectorant, diuretic and antihelmintic. 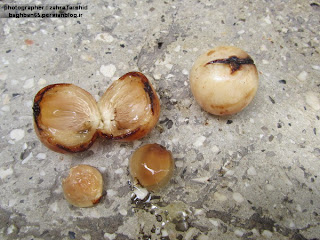 How to Open/Cut:
Lasura does not need peeling, but the seed requires removal if it’s to be used in recipes. Simply cut in half and use a small spoon to remove the mucilaginous seed from the center of the lasora.

Storage:
Unripe lasura keeps for a month when placed in a small plastic bag in the refrigerator.

Ripe fruits have a much higher perishability and will keep ony for one week in similar conditions. To avoid bruised, splitting fruits that will invariably cause a slimy mess, spread ripe fruits in a shallow container. Better yet, put ripe lasura in a clamshell container similar to those used for other sensitive, perishable fruits like raspberries and blueberries.

Lasura Recipe Ideas and Uses:
--Make pickled lasura (also known as pickled gunda) by heating oil and stirring in spices such as chili powder, mustard seed, cumin, fenugreek and turmeric. Cut and remove the seeds from the lasura, and add the halves to the oil to coat in the spices. If desired, add raw mango. Transfer to a jar, where it will keep for six months in the fridge.
--Use ripe pickled fruits akin to capers: top on vegetables, marinated tofu, and add to soups. These uses are especially popular in Taiwanese cuisine. In fact, jars of the pickled fruit look no different than, say, olives. 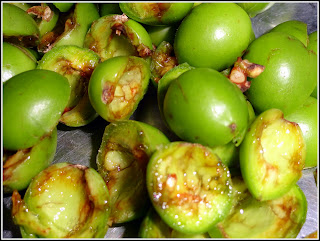 Random Facts:
Some offices simply rub lasura’s gelatinous flesh across envelopes as a substitute for glue. This additional function of the fruit could be the source of lasura’s other name, the glue berry. 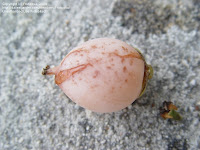 Related Fruits:
Cordia domestica
Yellow cordia (Cordia lutea)
Beach cordia (Cordia subcordata)
Bairola (Cordia vestita)
Texas olive (Cordia boisseieri)
Scarlet cordia (Cordia sebestina)
*These are just a handful of related trees: the Cordia genus has over 300 species. Not all of these species are edible—India’s varieties described in the above entry are considered some of the tastiest. 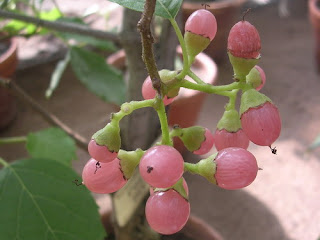 Posted by Catherine Reddy at 4:10 AM