All About Wood Apple Fruit

Origin of Wood Apple
Wood apples are native to India, parts of Sri Lanka, Bangladesh and Pakistan. The history of wood apple is slightly blurry because it’s often referenced as “bael,” which may also be a similar fruit, Aegle marmelos.

However, wood apple’s Sanskrit term, “kapittha,” receives several mentions in a number of ancient texts. According to the book, “Hinduism: an Alphabetical Guide,” the Puranas—Sanskrit texts dating between 1BC and 1,000 AD—referenced wood apple seed as being like great cosmic egg holding the origin of creation. Buddhist scholar Xuanzang (602 and 664 AD) mentioned wood apple as an Indian fruit, and military commander and poet Chauvundaraya (940-989AD) listed wood apple in numerous medicinal remedies. 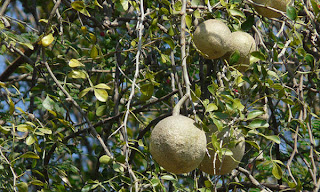 Availability of Wood Apple in India
Wood apple grows in abundance throughout India’s drier regions and is cultivated along both peninsulas of the country. Along with arid conditions, the fruit requires monsoons to thrive. Wood apples grow along the plains in the north, south, east and central areas of India. States growing the fruit include Maharashtra, Andhra Pradesh, Tamil Nadu, Kerala, Karnataka, Madhya Pradesh and the western Himalayas. In the cooler northern regions, the fruit grows well up to 450 meters.

India does not grow specific cultivars, as it’s not a popular commercial crop despite its ubiquity. However, Maharashtra grows some of the larger, sweeter varieties thanks to its small interest in the crop.

Where to find Wood Apple in India
Wood apple season is October through March. In these months, the fruit is easily found for those seeking its tangy, musky flesh.  Shops large and small sell wood apples, including juice shops willing to blend the pulp with a bit of milk and sugar.

Checking for Ripeness in Wood Apple
As wood apples ripen, they go from a greenish white color to developing a tough, brown speckled wooden shell that looks and feels similar to tree bark.

To gauge the fruit’s edibility, give it the “bounce test” by dropping the wood apple on a hard surface—if it bounces, it’s not yet ripe. If it merely falls to the ground with a soft thud, it’s ready to eat. Ripe fruits also emit a sugary yet musky aroma.

Taste of Wood Apple
Wood apple’s texture and taste are quite similar to tamarind. Its flavor is sweet, pungent, lemony and acidic with a pleasantly fermented aftertaste. Some do not care for the taste, as the fermented notes may be interpreted as distasteful putridity and muskiness. Though perhaps a bizarre descriptor, its texture resembles wet marzipan—slightly granular and mealy, yet damp and sticky. Of the two types of fruit, the small wood apples taste significantly more tart and sour than the large ones.

Parts of the fibrous strings encasing the fruit sometimes become part of the spoonful, but these do not detract greatly from the pulp’s taste or texture. The numerous tiny hard seeds require no spitting or removal.

Nutritional Value of Wood Apple
According to the National Institute of Nutrition’s book, “Nutritive Value of Indian Foods,” wood apples contain the following values per 100g: 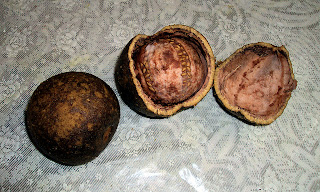 Health Benefits of Wood Apple
Given the fruit’s antiquity, the number of traditional remedies attributed to wood apple is unsurprising. According to the book, “Indian Medicinal Plants,” wood apples are an antiscorbutic, carminative, and digestive stimulant. The leaves possess a number of health benefits, as they are used for indigestion, diarrhea, dysentery and haemorrhoids. Wood apple greatly assists with bowel health… offering sometimes too much assistance.

A number of medicinal concoctions include the fruit. As per the book, “Encyclopedia of World Medicinal Plants,” the pulp mixed with cardamom, honey and cumin seeds remedy liver cirrhosis of malnourished children, piles, and diarrhea. Traditional healers have also prescribed the fruit to fight breast and uterine cancer.

How to Open/Cut:
Wood apple is tougher to open than some of the most high-maintenance nuts. To get to the pulp, hold the fruit in place and give it soft, consistent blows with a hammer. Others simply pound the fruit on concrete. If steady with a knife, it’s also possible to hack the fruit methodolically while rotating the fruit until it cracks open—this method isn’t recommended for those wishing to keep all of their fingers.

Storage:
Wood apples ripen post-harvesting. If necessary, keep the fruit at room temperature where it will ripen over the course of 10 days. Wood apple pulp has a remarkably long shelf life, as it will keep for two months if placed in the refrigerator.

To freeze the fruit, extract the pulp and mix it with lemon juice. Store in the freezer, where it will keep until the following season.

Recipe Ideas and Uses:
--Make wood apple sharbat by pulverizing the pulp in a bit of water, and then filtering the pulp and seeds. Add sugar as necessary, chill, and serve.
--Make a wood apple milkshake: sift the juice from the pulp and seeds by pressing it through a cheesecloth, then blend the juice with soy or nut milk. Thicken with nut flour and sweeten with agave if desired.
--Make wood apple chutney by frying dal with a pinch of oil. Stir in green chilis, and leave the oil to cool. Add the wood apple pulp and to the concoction, then pulverize in a mixie. Stir in curry leaves and heated mustard seed, then store in an airtight container in the refrigerator.
--A sweeter chutney may be created by pulverizing wood apple with chili, salt, cumin seeds, and jaggery.
--Use wood apple as a substitute in recipes calling for tamarind or bael.

Random Facts:
The wood apple pose is one of the 28 single hand mudras incorporated by classical Indian dancers.

Another traditional use of bael pulp is its topical application as a way of boosting saggy breasts. 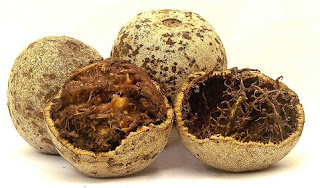 Posted by Catherine Reddy at 7:25 AM