All About Agathi (Sesbania grandiflora)

Origin of Agathi
Agathi originates in Asia, specifically India, Malaysia, and the Philippines. Its native range extends to Burma and Australia. According to the World Agro Forestry Centre, the precise origin is unknown, but there are links to a closely related species found in Australia (S. Formosa): This close connection gives credence to the theory that the plant’s native to Indonesia.

One of the plant’s earliest links to India lies in its namesake, agasthi. It’s believed that Sesbania grandiflora is named after the Vedic sage, Agastya. Considered the father of Tamil literature, Agastya likely lived between 6 and 7th century BC, and he specialized in medicine, spirituality, and language.

Today, agathi grows throughout Mexico and the US Southwest region, the warmer areas of South America, and parts of Africa. In West Africa, for example, agathi’s been cultivated for the past 150 years. It’s also an exotic plant in Cuba, the Dominican Republic, and Nepal.

Availability of Agathi
Agathi is not a commercial crop, and the flowers do not sit in wicker baskets awaiting sale in the major produce markets. Instead, they manage a humble existence growing in the banks near major crops, and in gardens. Sometimes, bunches of the leaves appear in local produce stalls, likely to appease the older generation who insist on the plant’s numerous health benefits.

Though the flowers feature in some traditional cuisines, one gets the impression that their inclusion was born from necessity rather than taste. And yet, agathi makes cameos throughout the kitchens of Laos, Thailand, India, the Philippines, and Indonesia. Many accounts of agathi dishes are born from children who recall their parents plucking parts of the plant for use in homemade dishes.

In India, the plant grows in abundance throughout many states, including Tamil Nadu, Andhra Pradesh, Kerala, Assam, Gujarat, and Bengal. They thrive in hot, humid areas and can grow like weeds in close quarters. 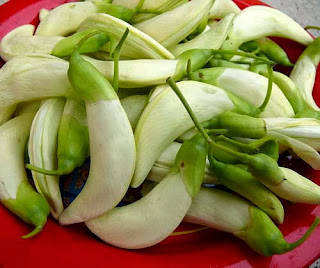 Taste
Agathi leaves taste bitter, sour, and mildly tart. Most cooks counteract this bitterness with coconut milk, and some swear by the addition of garlic to combat the stomach pain arising from consuming too much agathi.

The flowers are also bitter and astringent, but the white are less so than the red. It’s possible to reduce the bitterness by removing the stamen. The flower’s texture is mildly crunchy and fibrous, but pressure cooking or steaming for ten minutes will soften it. It’s also best to choose the flowers that have not yet bloomed, as these too will be softer and less leathery.

Nutritional Value
According to the USDA nutrient database, 100g of Sesbania flower contains the following values:

As per the book, “Nutritive Value of Indian Foods,” 100g agathi leaves contain the following values:

Indeed, the leaves are an excellent source of calcium and iron. The abundance of these nutrients is one reason for its reputation as a bone strengthener. 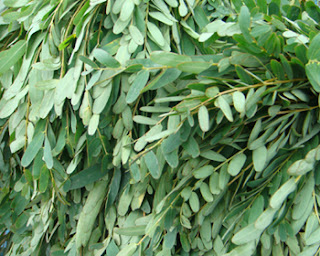 Health Benefits
Agathi’s health benefits are exhaustive, and as such, the plant features in a number of traditional remedies dating back thousands of years. In Ayurveda, agathi leaves treat fever, sinus, and respiratory problems. It acts as a coolant, purgative, and worm-killer. According to the book, “Home Remedies,” the leaf is also an anthelmintic, diuretic, laxative, and can aggravate pitta. It has the potential to treat toxicosis, itching, and excess kapha. The flowers are acrid, bitter, and astringent. Local healers use the flowers to treat night blindness, headaches, catarrh, cough, and fevers. 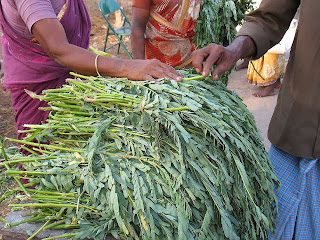 Young white agathi flowers have closed white petals in the shape of a crescent. As it blooms, the crescent grows longer and at last, a few of the butterfly-like flower petals become separated and billowy.

Preparation Methods
Many parts of agathi can be exploited in dishes: the young leaves, giant white flowers, seeds, and tender pods.

To prepare the small, ovid leaves, first remove them from the stem: Achieve this by pinching the stalk with the thumb and forefinger, and then sliding down the main branch. The leaves should fall away with ease. Rinse the leaves in a colander to remove any dirt or sediment. They are now ready to be sautéed, pressure cooked, juiced, or boiled.

To prepare the flower, remove the stamen and calyx. This will improve the flavor substantially—otherwise, expect the flower to taste bitter. Wash gently. Some recommend squeezing the flowers to drain its water, while others insist that this clears the flower of its sweet nectar. Prepare by deep-frying in batter, sautéing, stewing, steaming, grilling or simply eat raw. If steaming the flowers, do so for ten minutes, and then transfer to cold water. Adding salt to the warm water will also boost the flavor.

Recipe Ideas and Uses
For the leaves, agathi keerai is one of the most common dishes. This is, simply put, sautéed greens. To make, heat oil on the stovetop: use mustard, coconut, or safflower. Heat mustard seeds until popped, and add garlic and onion if desired. Next, add urad or moong dal, red chili, and green chili. Throw the leaves into the pan, along with turmeric, asafetida, and salt. When the leaves are sufficiently soft, toss in dal and shredded coconut. Some add the leaves to coconut milk soup as well.

For the flowers, a Bengali delicacy is bok phool bhaja, or, blossom fritters. To prepare, remove the stamen and calyx. Make a thick batter of gram and rice flower, baking soda, chili powder, nigella seeds, sugar, and salt. Dip the white flowers in the batter, and then deep fry until golden brown.

It’s also possible to make stuffed flowers: make a concoction of finely chopped sautéed tofu, garlic, ginger, soy sauce, and coconut oil. Use a paring knife to cut a slit in the flowers, stuff with the filling, and then deep fry or bake as a healthy alternative.

Or, make Burmese sour soup from the flowers: In a pot, heat cooking oil and coarsely chopped chives. Next, add the prepared flowers (sans stamen and calyx), and two cups of water. Cover, and let it simmer for five minutes. And tamarind juice and salt to season.  It’s also possible to simmer the flowers in a spicy tomato-based broth, or a thick coconut milk broth.

Add the steamed flowers to a traditional Indonesian dish, pecel. The dish is an amalgam of other vegetables—such as sautéed greens, carrots, and lettuce—a protein source, rice, and a spicy sauce often made from peanuts, garlic, lime, tamarind, and chili. 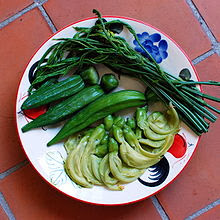 Random Facts
Agathi’s other name, “hummingbird flower,” is named for its resemblance to a small bird sitting in the tree. 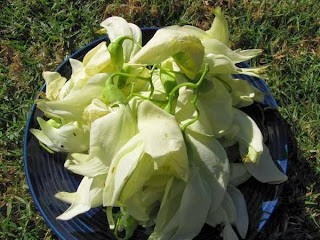 Posted by Catherine Reddy at 11:24 AM