All About Petha, or, Ash Gourd (Benincasa hispida)

Origin of Ash Gourd
Ash gourd’s precise origin is unknown for a few reasons: First, it is an ancient vegetable; and secondly, ash gourd’s incredible genetic diversity spans several regions. Botanists have come up with a few possible contenders including Japan, Indonesia, China, and Indo-Malaysia. Indeed, ash gourds have existed in all of these regions for thousands of years—Chinese literature praises its medicinal value in texts from 5 to 6th century AD. Wax gourd is seldom seen in Western countries, as the cooler temperatures inhibit its cultivation.

Availability of Ash Gourd
From a consumer standpoint, ash gourds are available most of the year, if not year round. Despite the country’s staggered growing times they are easily transported between states on account of its hardiness. At room temperature, ash gourds keep for two to three months; and possibly up to six, in dry, cool conditions. It’s best to keep any cut wedges in the refrigerator, where they will keep for a week. 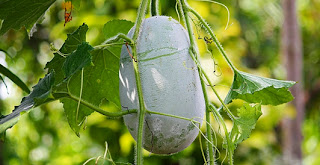 Ash gourds grow at various times of year, depending on the location. In the south, for instance, Kerala Agriculture University states that ideal sowing times are from January through March, and again in September through December. The book, “Biodiversity in Horticultural Crops,” on the other hand, states that the ideal sowing season in the North is from October through November. Regions with mild winters may grow the vegetable year round. From the time of sowing the seeds, flowering and cultivation occur in a range of approximately 70 to 120 days.

Taste
Ash gourds taste light, mildly insipid, slightly sweet, and earthy. As the vegetable matures, these notes become subtler. Comparisons have been made to the nuttiness of a spaghetti squash, and when cooked, like a “watery baked potato.” Its texture is more watery than most vegetables. Raw, the texture is like a dense cucumber. When cooked, it resembles chayote or bottle gourd. 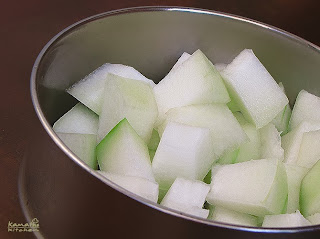 Health Benefits
The health benefits of ash gourd have been well documented for centuries. Author and Ayurvedic practitioner, Vaidya Suresh Chaturvedi, recommends ash gourd as a coolant and refrigerant, as well as a digestive. He also suggests consuming ash gourd to alleviate heat-induced headaches, tension, heartburn, vomiting, and over-acidity. Other uses include as a remedy against asthma and epilepsy. According to the book, “The Encyclopedia of Medicinal Plants,” the seeds treat coughs, fevers, excessive thirst, and acts as a tapeworm remedy. 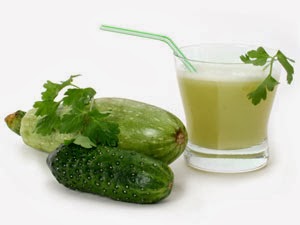 Selecting Ash Gourd
Ash gourd is ripe when the fine hairs are no longer present on its skin, as this indicates that the vegetable is still immature. The gourds vary in color and shape, depending on its particular category: Some are dark green, whereas others are pale gray. It is common for a wax gourd’s thick skin to be mottled or have what appears to be a dusty white coat—the latter indicates that the vegetable has fully matured (though the younger dark green fruits are still perfectly edible). The shape of wax gourds varies, as some may be oblong like a squash, and others are round like a pumpkin.

Select a gourd that feels heavy for its size, and that has no bruised marks or sunken indentations. The interior of a prime ash gourd is white with a crisp, even texture. 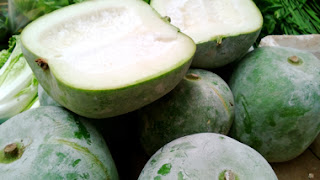 Preparation Methods
Ash gourd is prepared much the same way as pumpkin or any other tough-fleshed, thin-skinned gourd: First, cut the fruit in half, and then into wedges (eighths will suffice). Slice away the seeds from the core, and then use a large, sharp knife to cut away its firm, tough skin. Once the piece has been de-seeded and skinned, cut into desired sized pieces, such as quarters or chunks. Or, grate each wedge to produce shredded gourd.

The consistency of prepared, cooked ash gourd is firmer than several squashes, but more tender than pumpkin.

Preparation tips:
If boiling, determine its readiness by piercing with a fork. Its cooked texture is similar to a cooked pumpkin or squash, such as chayote or bottle gourd.
--If shredding raw for salads, place in cheesecloth and squeeze out the liquid. This will ensure the rest of the salad will not be watered down.
--It is possible to bake winter melon, but use a lined pan: Otherwise, it will constantly trickle water into the burners.

Recipe Ideas and Uses
White pumpkin’s easy going, versatile flavor makes it ideal for use in savory and sweet dishes.

Raw:
-- To make a healthy, refreshing cold soup, blend an even ratio of cucumber to raw chopped ash gourd. Separately, grind cashews into a fine powder. Blend the pulverized nuts to the vegetable concoction to add creaminess, and throw in minced garlic, salt, lemon juice, and a pinch of cumin for taste.
--Raw ash gourd juice is recommended as a coolant and for those with asthma, respiratory, or bronchial problems. Simply grate, squeeze and strain the gourd, or, use a juicer. Mix with black pepper and honey for further therapeutic benefits.
--Make a salad of ash gourd by shredding the vegetable, draining it of its water, and then combining with a soy yogurt or cashew curd. Add shredded carrots and beetroot, raisins or grapes, walnuts, and a pinch of mustard. 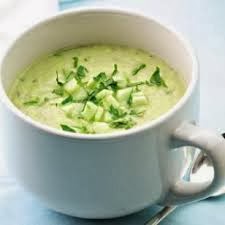 Cooked savory:
--To get acquainted with ash gourd’s subtle taste, make a simple mash: Simmer in shallow water or pressure cook for about 15 minutes, until the vegetable has become tender. Mash into a slightly chunky puree. Separately, heat oil, mustard seeds, and onion, garlic, and chili. Once tempered, add the mashed gourd to the spice pan and mix thoroughly.
--To make an easy ash gourd fry, heat mustard seeds, garlic, and coconut oil until the seeds pop. Add chopped gourd, and cover for 10 minutes until soft. Do not add water, as the gourd’s is sufficient. Once soft, add grated coconut and dal. Mix for another few minutes, and then serve.
--For a hot soup, make a classic Kerala recipe by simmering chunks of the boiled gourd with stewed coconut milk, curry leaves, salt, and cracked mustard seeds. Sweeten with a pinch of sugar if desired.
--Use as a substitute in any recipe calling for chayote or bottle gourd.

Cooked sweet:
--Make sweet halva by grating the ash gourd flesh and simmering until its water evaporates. It is important to ensure most of the liquid is gone from the mix; else the halva will be too runny. Also stir frequently to avoid burning the gourd. Add palm sugar, reduce the heat, and stir until the concoction is golden brown. Separately, heat oil and sauté raisins and almonds until lightly fried. Combine the gourd with the mix, and combine cinnamon, cardamom, and anise.
--Ash gourd is the principle ingredient in a famous Agra sweet known as petha. To make this translucent soft candy, cut the ash gourd into cubes, slake in lime, and then simmer the chunks in sugary syrup for 15 minutes. 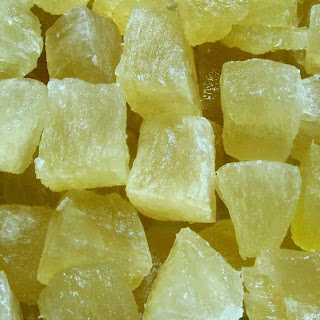 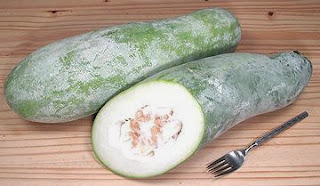 Posted by Catherine Reddy at 4:45 AM