Varieties of Mangos in India

The number of different mango cultivars in India is estimated between 500 and 1,000: Describing all of these mangoes would be an impossible undertaking. Yet, 20 of the most popular cultivars are filled with stories of India’s history, culture and even trade problems. It’s a badge of pride to know the different varieties of mangoes, and one bestowed on too few of India’s residents. From the top left to the bottom right: 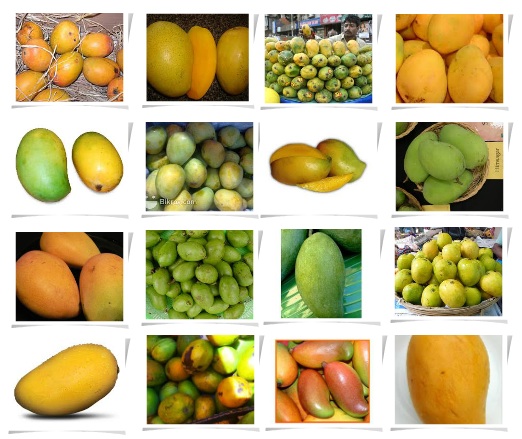 Alphonso: Also known as hapoo, it’s easily one of the most beloved varieties in India and abroad. Rave about how much you love mangoes to any Indian and they’ll respond, “yes, but have you tried the alphonso?” This variety grows in Maharashtra, Gujarat and Karnataka. Its firm yet fiberless pulp ensures a smooth creamy mango while still maintaining its integrity when cut.

Banganapalli: Another fiberless cultivar grown in the South. This mango is Andhra Pradesh’s prime variety, and those hailing from this state are fiercely loyal of this moderately juicy, yellow variety.

Saroli/Bombay Green: A popular variety in North India and Pakistan. It’s one of the first mangoes to appear during the season. Sweet Bombay green mangos are packed with flavor.

Chaunsa: This variety gives the alphonso a run for its money as India’s favorite mango cultivar. Its name was given by Sher Shah Suri, the Sultan of the Muslim Suri empire from 1540 to 1545. Because the chaunsa variety was his favorite, it’s hailed as “the king of mangos.” Today it grows in the North and throughout Pakistan in early June throughout the end of August.

Dashehari: Incredibly, 80 percent of the mangos cultivated in the North of India can be traced back to the 200-year-old Dashehari trees located in the village bearing its namesake. In this regard, Dashehari mangoes are one of the “mother” mango varieties in the country. Apparently the first tree was planted when a wandering mango tradesman threw a variety onto the ground in a fit of rage after getting into a fight with the monk who housed him. The community in Malihabad takes every efforts to preserve the heritage of these fantastic trees. And rightfully so, as its pulp is sweet and succulent.

Fazli: A mango originating in Bihar and West Bengal. This cultivar garnered controversy when India listed it as its own product. Countries list various products for trade purposes, which in turn affect marketing and pricing efforts. Bangladesh, a grower of Fazli mangoes, wasn’t thrilled of India’s move. The country claims India may unfairly represent itself as the only supplier of this variety and dominate the market as a result.

Gulab Khas: This variety grows in Bihar and is known for its rosy flavor and its gorgeous blush. This cultivar is also the highlight of a story by a famous Indian author, Abul Fazl Siddiqi. In the story, he describes a mango contest held every five years in which the northern aristocracy judges the best new cultivar. In the end, the cultivar grown by a humble female gardener—the gulab khas—wins the prize. While describing the taste and blush of the mangoes, Siddiqi masterfully stresses the feudal tension between the regions of India.

Himsagar: A variety grown in West Bengal but not very well-known outside of this region. It’s a thin-skinned cultivar with smooth, silky flesh and sweeter than most other varieties. The sugary pulp melts in the mouth. Himsagars come to season from mid June until the end of the month. An unfortunate short season for such a delectable variety.

Kesar: one of the few varieties exported abroad. Kesars hail from Gujarat--their intense aroma serves as a siren song beckoning passerbies to take them home. Its acidity and sweetness is in perfect balance, though the fruit bears irregularly much to the dismay of farmers.

Kishenbhog: This variety grows in North Bihar and sweet, but firm and fibrous. The fruit also plays a critical role in the gripping book, “Balchanwa.” A child recalls his father trespassing to take two kishenbhogs from an orchard. Ultimately the feudal owner of the mango tree lynches his father.

Langra: another variety that stirs great pride in Northern Indians. Its flesh is mildly fibrous and with a distinct turpentine taste. Langra also has a short season, lasting only from mid-July to the end of the month. Just as Dashehari mangos have a mother tree in Malihabad, a langra mother tree exists in Varanasi. This langra tree is believed to spawn many of India’s other mango varieties. The tree’s original owner was lame, and thus was born the name, “langra.”

Mankurad: This cultivar is the pride and joy of Goa. In fact, this fiberless, firm-fleshed variety often fetches a price significantly higher than the alphonso. In 2012 some buyers willingly purchased 12 early season mankurads at the price of $80 to $100. The quantity of fruits is heavily contingent on the temperature of the flowering period. Also, if the weather is too cold or hot during the tender stages, the fruits drop prematurely.

Neelam: a consistent, large-yielding variety growing thoughout India and Pakistan: Hyderabad in particular is famous for this variety. Neelams come to the markets in May and last until the end of June. David Davidar romanticizes this cultivar in his book, “House of Blue Mangoes,” when the character Daniel proclaims, “There’s no question that the Chevathar Neelam is the greatest mango in the world. Now that we know that, we need to proclaim its glories far and wide.”

Pairi: Grows thoughout Goa and coastal Maharashtra. Though the fruit doesn’t keep well, its texture is fiberless and the taste is a delightful balance of sugar and acid. It’s one of the best juicing mangos, even if mixing a more flavorful cultivar is common. Pairis have a mildly spicy aroma, and they’re best consumed when the fruit turns slightly yellow. 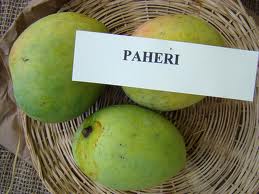 Totapuri: Its small green appearance and beak at the end of the fruit resembles a parrot, hence its name (as “tota” means “parrot” in Hindi). Unlike other cultivars, it’s acceptable to eat the skin of this variety. But, don’t expect totapuris to be sweet like the other cultivars, either! This variety is a bit crunchy and tangy, best served with salt and chili powder. One could also pickle this cultivar quite easily.

Mallika: technically a newer hybrid of the neelum and dasheri. Its orange pulp is of excellent quality thanks to its pleasant honey sweetness. In fact, it’s a proud winner of the Fairchild Tropical Garden Best of Show award for taste. Growers like the variety for its disease resistance and productivity. Mallika’s season lasts from June to July.

Posted by Catherine Reddy at 3:36 AM