Origin of Myrobalan
The precise origins of myrobalan (also known as haritaki) are unknown, but the tree has been growing in the country for centuries. In fact, myrobalan is mentioned in ancient Indian Hindu mythology—in the Agni Purana, a concoction of the Indian gooseberry and myrobalan is prescribed to live a long life. If Hindu mythology is to be believed, the herb came to India’s soils when it fell to the earth from Lord Indira’s cup as a drop of nectar.

Availability of Myrobalan in India
Finding myrobalan trees may require scavenging and knowledge of the tree’s appearance, as it’s not sold often in its fresh form. However, the fruit is readily available as a powdered supplement in Ayurveda and other health stores.

Myrobalan flowers in the season of April through June, and fruits from January through March. 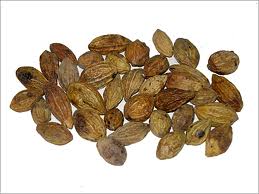 Where to find Myrobalan in India
Myrobalan grows in most every part of India: Near the Himalayan region, it grows up to 1600 meters; In central and southern India it grows wild from Madras to Mumbai; from East of Assam to West Bengal one can find myrobalan as well.

Checking for Ripeness in Myrobalan
Unripe fruits are green, slowly turning yellow or brown depending on the variety. The fruits best for consumption are those that fall from the tree unaided. Expect the skin of some fruits to be wrinkled, brown, purplish or even black. 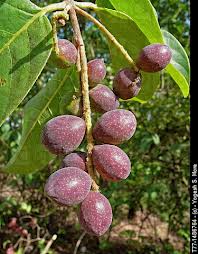 Taste of Myrobalan
The taste depends on the variety: the largest type, suvari harade, is more stringent than the smaller varieties. All, however, have a unique taste and a balanced ratio of sourness, bitterness, astringency and pungency. In Ayurveda, haritaki contains all of the 6 tastes except for saltiness.

Its flesh is pulpy yet firm. Eating fresh haritaki is not as feasible or desirable as, say, a crisp apple but myrobalan is not entirely unpalatable either.

Nutritional Value of Myrobalan
According to the book, “Dyes and Tannins,” fresh myrobalan contains the following per 100g:

Health Benefits of Myrobalan
In Tibet, myrobalan has the reputation as the “king of medicines” for its potent medicinal powers. Indeed, the fruit is referenced as a healer of everything from hair loss to herpes to cancerous tumors.

The traditional medicinal applications of myrobalan are remarkably varied. According to the book, “Indigenous Health Care and Ethno-Medicine,” haritaki has been prepared in the following ways for the following symptoms:
--In its powdered form taken with water, 10g of myrobalan is taken to combat diabetes
--In its powdered form administered with hot milk, one fruit taken over the course of 10 days remedies jaundice
--Two crushed myrobalan fruits mixed with lemon juice in paste form treats nose bleeds
--Roasted myrobalan crushed to a powder combined with ghee treats sore throat
--Powdered myrobalan mixed with either ghee or pipal seeds treat constipation
--A paste of myrobalan topically applied is used to heal eye infections and insect bites 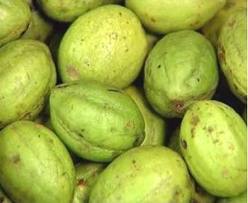 The book, “The Way of Ayurveda Herbs” lists haritaki as an aid in reducing cough, vomiting, coarse throat, malabsorption, spleen problems, tumors, diarrhea, jaundice, itchy skin, edema, parasites, distention and heart disease. It also states haritaki remedies digestive issues and is beneficial for brain health and sharpening the senses. Myrobalan’s unique ability to balance all three doshas is why some practitioners consider the fruit one of the most important in Ayurveda.

How to Open/Cut:
The fruits should not be collected until they’ve fallen from the tree. If picked for medicinal purposes, they should dry in the shade.

Few consume the fruit in large numbers. In fact, it’s recommended to take a small bite of a ripe fruit after dinner to aid in digestion.

Myrobalan Recipe Ideas and Uses:
--Myrobalan is used to create a dye base with a light, buttery hue.
--Unripe myrobalan may be pickled
--Rural Indians boil the fruit and add sugar for a syrupy sweet confection
--Small amounts of fresh chopped haritaki may be used in salads
--Haritaki is a main ingredient in black salt, which in turn is a main component of chaat masala spice blend. 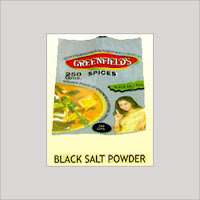 Random Facts:
While haritaki fruit has been used for Hindu worship rituals, texts on Indian pharmacology from the late 1800s stated that northern Indians would not sit under a beleric tree because it was thought to be the home of demons.

Ancient Sanskrit texts reference the nut’s use as a five-sided dice. 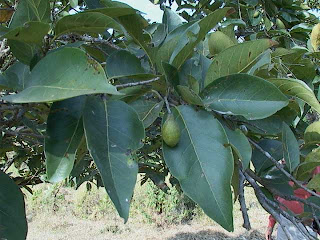 Posted by Catherine Reddy at 8:38 AM