The US Supreme Court might’ve ruled that tomatoes are a vegetable, but botanically speaking, they’re a fruit—a berry, to be exact.

Origin of Tomato
Countries across the world use tomatoes as a key ingredient in their dishes, but this wasn’t always the case. For instance, the people of Florence, Italy used tomatoes as mere tabletop decoration until the late 17th century. Americans didn’t harvest tomatoes until 1835 because of the belief they were poisonous. Despite their lukewarm, wary reception in some countries, they’re grown throughout the world today and are a pantry staple.

Tomatos are native to South America, and it’s believed the Pueblos harvested them as early as 500BC. The fruit came to India by way of Portuguese explorers during the early 16th century. Because tomatoes thrive in warm, sunny conditions with no severe frost, the plants took well to Indian soils. 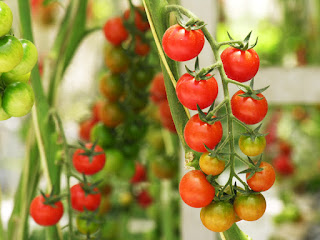 Availability of Tomato in India
Figures from 2010 show India as the world’s third largest grower of tomatoes, producing nearly 12 million tonnes. The National Horticulture Board gives a higher figure, estimating India’s production to be closer to 14 million.

India grows several varieties of tomatoes, from the small lively cherry tomato bursting with juice to the large, fibrous beefsteak. The most common tomato varities are beefsteak, cherry, heirloom, roma and pear.

A few of the 7,500 tomato varieties grow in India, many with rather peculiar names: “best of all,” fire ball, desi Dixon, king humbere, roma and red cloud are a few examples.

Shops large and small sell tomatoes, from the villager selling them in large wicker baskets to mega marts selling them chilled with three other variants. The tomato’s popularity is no doubt due to its necessity in several Indian staples such as rasam, a peppery tomato broth served over rice; and dal, a thick blend of lentils and occasional tomato served with chapatis. Just as the Italians couldn’t imagine the absence of tomato in pasta dishes and pizzas, neither could Indians fathom a meal without its presence. 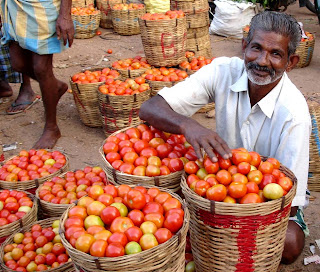 Checking for Ripeness in Tomato
Tomatoes come in several colors, from pale yellowish green to deep purple. Thus, color is one of the least reliable indicators of a tomato’s ripeness: Besides, many tomates are plucked when green and underripe, and are then gassed to ripen artificially.

In smaller tomatoes, look for taut, uniform, shiny skin. Some of the larger variants may have velvety skin, but all tomatoes should maintain uniformity with no obvious bruising or molding near the stem. Select tomatoes that feel heavy for their size.

Additionally, the best tomatoes have a basil-like mildly spicy aroma when ripe: if possible, avoid selecting chilled tomatoes, as this masks the fragrance and reduces the quality in taste.

Taste of Tomato
Tomatoes are one of the few fruits with a notably salty taste. In fact, its savory, low-sugar flavor profile is the primary reason for its legal classification as a vegetable in the United States. Indeed, the robust, slightly acidic flavor is better suited for hearty dishes instead of sweets and desserts. Several factors affect the overall shape and taste of a tomato, including temperature, access to sunlight, and soil salinity. The taste of tomatoes varies greatly between cultivars. Cherry tomatoes tend to be both sweeter and sourer than larger varieties. They are also juicer and pulpier than many heirloom and beefsteak tomatoes.

Roma tomatoes share many characteristics with cherry tomatoes: it too is juicy, sweet and tangy. The high pulp makes romas better suited for sauces and purees than for slicing.

Heirlooms are unpredictable in color and taste, which is one reason for their growing popularity. Indeed, heirlooms have a multifaceted, robust flavor: Many claim they had never tasted a true tomato until they bit into an heirloom.

Beefsteaks are the dullest and flattest in flavor, but their low juice and ability to maintain their integrity when cut make them prized for sandwiches and for stuffed tomato recipes.

Nutritional Value of Tomato
According to the USDA nutrient database, 100g of tomatoes contain the following values: 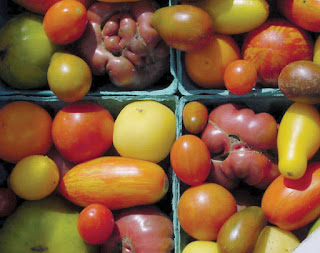 Health Benefits of Tomato
Tomatoes are one of the lowest-calorie fruits, containing a mere 18kcal per 100 grams. Its low-fat, low-sugar profile isn’t the only reason for why tomatoes are so healthy: they also contain high amounts of vitamin A, C and even Vitamin K.

According to the book, “Ayurvedic Cooking for Self-Healing,” tomatoes provoke all doshas and practitioners warn of its toxicity to the system. Authors Usha and Vasan Lad warn against tomato consumption for those with arthritic conditions, kidney problems and gallstones. Despite these warnings, the book suggests drinking tomato juice to aid digestion, mental fatigue, insomnia, breathlessness, chest pain and for weight control.

Other sources have more positive things to say regarding the tomato. Lisa Turner, author of the book, “Meals that Heal,” explain that studies show people who consume tomatoes regularly are less likely to develop several types of cancers. Additionally, she cites a study from a cancer research center finding that cancer patients who regularly ate tomatoes (amongst other vegetables) doubled their survival time compared to those who didn’t eat the fruit as often.

Tomatoes contain high amounts of lycopene, an antioxidant that has repeatedly shown scientists its ability to ward off cancers, fight aging, and stave off other degenerative diseases. 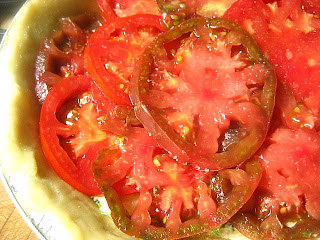 How to Open/Cut:
Tomatoes can be cut a number of ways: diced, into rings, sliced, or halved and de-fleshed. Use a sharp, serrated knife for best results. To dice, use a low-pulp tomato like the beefsteak. Cut in half and gently squeeze the juice from the tomato. Then, cut the halves into quarters, and then line the slices together skin-side down. Cut into small pieces.

Tip: soak non-organic tomatoes in a vinegar and salt solution to cleanse them of dirt and pesticides.

Storage:
Though many people place tomatoes in the refrigerator, this is actually one of the least effective ways to store the fruit: the shelf life is minimally expanded at the high cost of taste. After only a few days, refrigerated tomatoes taste insipid and the texture is mealy.

Keep tomato flavor rich and robust by placing the fruits in a basket lined with either newspaper or paper towels—never in a plastic bag, as this promotes mold. Avoid placing the bowl in places of extreme temperature fluctuations, such as near stoves or by the window in direct sunlight. If the space is humid, be sure to rotate the tomatoes in the bowl daily: this will prevent bruising.

Tomato Recipe Ideas and Uses:
Chefs have a harder time thinking of a dish that could exclude the tomato; not feature it. Indeed, tomatoes make an unconventional addition to chocolate cakes, ice creams, flans, ganache, and yes, cupcakes too.

But of course, tomatoes have a home in several Indian dishes: good luck making rasam, biryani, dals and mulligatawny without one. The fruit makes several cameos in curries, salads and rice dishes.

--Add chopped tomatoes for salsa recipes, bruschetta, guacamole, omelets, and salads. Fold into rice dishes and hummus dips as well.
--Include baked tomato for stuffed dishes, kebabs, and, when sprinkled with Italian spices, as a simple appetizer.
--Add tomato rings to sandwiches, quiches, ratatouille
--Sautee tomatoes as part of a stir fry
--Stew tomatoes for marinara and as the basis of many other sauces, be it for Italian pizzas, Moroccan tagine, or for Ethiopian stew.
--Puree tomatoes for pastes and soups. Pureed tomatoes also serve as the basis for creative dessert ideas mentioned above.
--Dehydrate them or add sundried tomatoes into dips, flatbread and flax crackers.

Random Facts:
As was the case in the United States, India considered the introduction of a genetically modified tomato in 2010 that was capable of lasting 45 days. The long shelf life is made possible by silencing two genes that trigger softness, and therefore the ones that facilitate in its decay.

A long shelf life tomato variety predates its arrival in India, as Israel grew a similar variety. The US sold long-lasting “Flavr Savrs” until they were pulled off the shelves in 1997 due to lack of sales. Whether this variety will catch on in India depends on obtaining clearance from the country’s regulatory committee—a process that may take between 3 and 5 years.

The larger a tomato grows, the more difficult it becomes for the fruit to maintain a perfectly round shape. This is why cherry tomatoes are almost always perfectly round, while beefsteak and heirlooms are often misshapen. 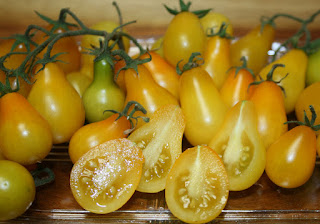 Posted by Catherine Reddy at 5:59 AM