All About Beetroot (Beta vulgaris)

Origin of Beetroot
Beetroot is the offspring of wild sea beet (Beta vulgaris subsp maritima), a plant with origins throughout the coasts of Europe, Africa, and India. Daniel Zohary explains in his book, “Domestication of Plants in the Old World,” that beetroot is poorly documented in an archeological context, but is linguistically well identified. One of the earliest documents supporting beetroot cultivation comes from Babylonia circa eighth century BC. Roman and Jewish sources also mention a domesticated form of beetroot near the Mediterranean basin around the first century BC. Other remnants were found dating back to Neolithic Aartswourd in north Netherlands, and Egypt’s third dynasty (2650-2575 BC). India’s own history with beetroot is just as muddled—though wild sea beet has grown on its soil for eons, when and how domesticated species arrived is more mysterious. It’s plausible that Europeans introduced beet strains during trade or invasion.

For centuries, the prized parts of beetroot were its leaves (used in cooking), and root (used in medicines). The Greeks, for example, feasted on the leaves with lentils and beans. They also offered the vegetable on a silver platter to Apollo, god of music, healing, and intellectual pursuits. The Romans were the first to seriously cultivate the plant, and lauded beets for their alleged aphrodisiacal qualities.

Moving forward in time, beet features in several political brawls—not because of its vegetable-like qualities, but rather for its ability to be converted into a sweetener that rivals cane sugar. According to the book, “Agricultural Plants,” the King of Prussia authorized Franz Karl Achard’s research into sugar extraction circa mid 1800s. France was especially interested in this science, as the British implemented naval blockades inhibiting sugar from entering the country’s borders. By 1830, the country was the largest producer of beet sugar; and by 1880, over half of the world’s sugar production derived from beetroot.

Today, 2013 figures from the FAO indicate that beets account for 30 percent of sugar production. India too uses sugar beets for sweetener: A 2013 article published in The Hindu explains how sugar plants from Karnataka to Punjab use beets on account of requiring less water than sugar cane.

Availability of Beetroot
Beetroot grows plentiful throughout the country, from the hills of South India to the chilly areas up north. Though India is the second largest producer of vegetables in the world, its position in beetroot production and trade is significantly lower. According to 2012 figures published by the UN Comtrade, India ranks 45th in the export of salad beetroot, salsify, celeriac, and radishes, and accounts for a mere .08 percent of global trade. The decentralized nature of the beet industry likely means most of production goes towards domestic consumption.

Despite these small trade figures, beets are an every day pantry item, found in shops large and small. It is not difficult to find these vegetables nestled between carrots and cauliflower on pushcarts rolling throughout the streets. Few veggies are more ubiquitous than the beetroot. Indeed, several of India’s cuisines feature this vegetable.

In 2007, Swiss-based bioengineering company, Syngnetna, ran test groups of its genetically modified sugar beets in Pune and Ambad. Whether or not these beets become commonplace is a decision left to government regulators and the staunchly anti-GMO citizenry. 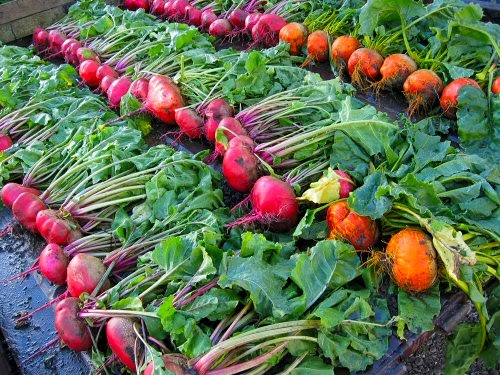 Taste
To taste a beet is to taste the earth—though some disdainfully equate this with a “dirty” taste, others appreciate its mild bitterness mixed with sweetness. Like carrots, beets are one of the sweetest vegetables. Many juicers appreciate beet’s sweetness as a way to temper the pungency of greens. As a tip, using liberal amounts of orange, lemon, or limejuice will brighten beet’s earthiness. Adding citrus juice will also highlight the vegetable’s underlying acidity.

Beets have a texture similar to carrots and turnips: Dense, fibrous, and difficult to chew. To make beetroot into more manageable bites, grate the raw vegetable or soften it through cooking.

Do not discard the beet’s green, leafy top—this mildly salty portion of the vegetable is highly nutritious and may be cooked similar to spinach. Use only the leaves and discard the stem, which is usually unpleasant and too fibrous. 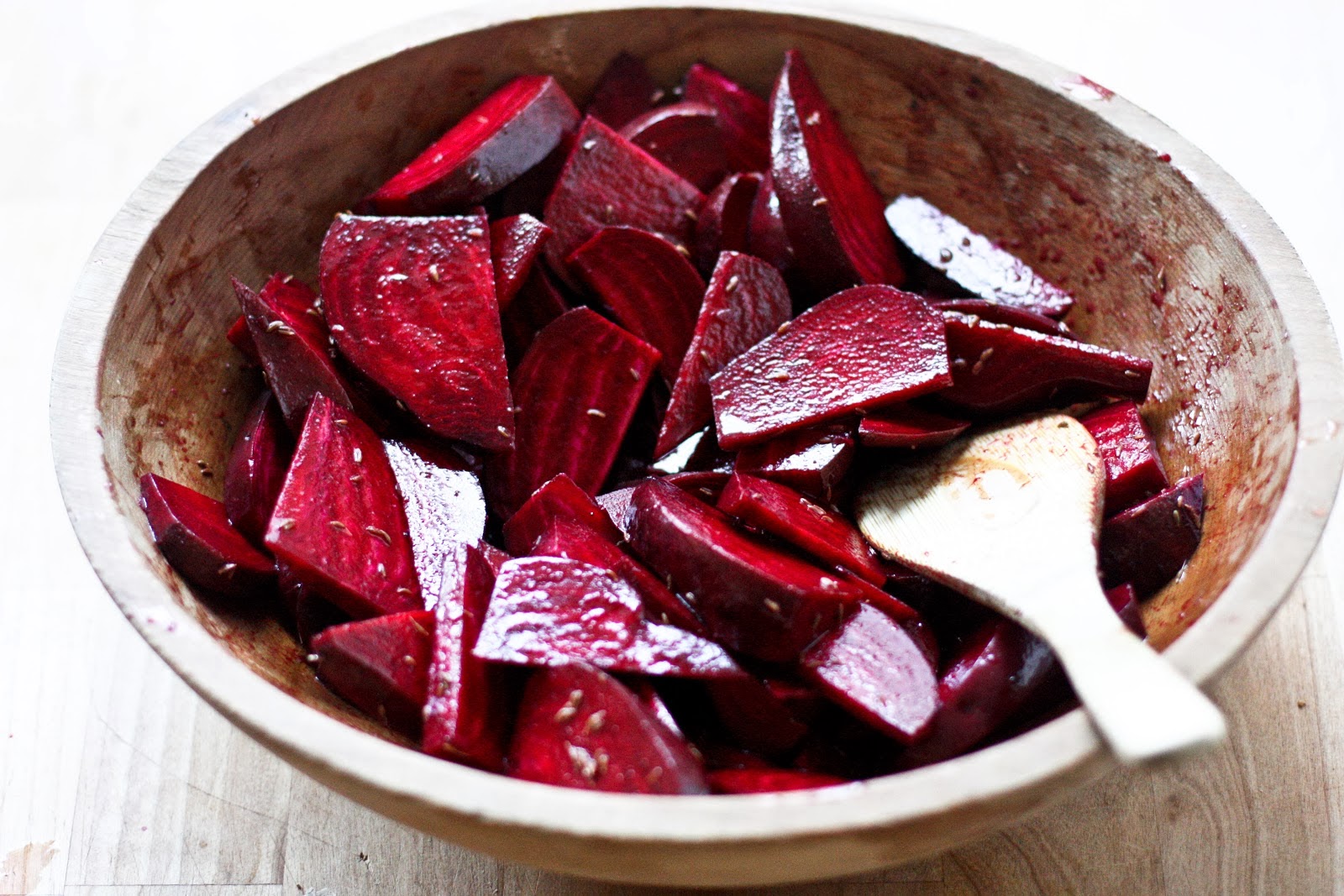 Nutritional Value
According to the USDA nutrient database, 100g of beet contains the following values:

Health Benefits
India has been recording beetroot’s medicinal uses for centuries. In 1833’s “Taleef Shereef, or Indian Medica,” author Muhammad Sharif Khan lists benefits including acting as a stomachic, laxative, remover of viscid mucus and bile, and combatting agent of “dry emaciation.” Beets are also well known for the blood promoting and liver cleansing qualities. As explained in the book, “The Way of Ayurvedic Herbs,” beets possess the ability to treat hemorrhoids on account of the vegetable’s ability to kickstart the liver into producing more bile.

Note: It is perfectly normal to experience discoloration of urine and feces after consuming beetroot. Reddish urine is known as beeturia, and happens in roughly 10 to 14 percent of the population. However, one possible concern is that those who have urine discoloration may have iron deficiencies, malabsorption, and low stomach acid. Another less startling theory is that it’s simply because of one’s genetics. 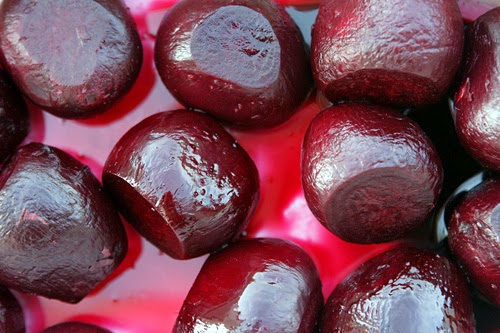 Selecting Beets
Choose firm beets with no obvious soft spots. It should be hard, though some smaller beets are softer. Avoid shriveled, sunken beets as this indicates that the beetroot has spoiled—consequently, its juice will be less robust.

Preparation Methods
Lop off the top of the beet: If its leafy top is still in fact, set aside and use the leaves in subsequent recipes. If using in salads, lop off the top; otherwise, leave the top intact for cooking—this keeps the juices preserved in the root. Wash the beets thoroughly with a coarse sponge or cloth, and only do so if preparing immediately. Cleaning prematurely results in undesirable softness.

Next, peel the beets, ideally with a spiral slicer. Once the beets are peeled, it’s possible to grate for use in raw salads, or to cut into eighth wedges. Note: some prefer to cook the beets first, and then peel them. The heat will make it easier to remove the skin, but reside also coats the pots and pans. At the very least, scrub thoroughly.

To boil beets, simmer for 15 minutes in a covered pan—the core should still be hard, but easily pierced with a fork or knife. Drain and rinse will cool water. Wait until the beets have cooled if using them in a cold dish.

To steam beets, add two inches of water to the pot, place the beets in the steamer, and cover. Leave the beats to steam for roughly 30 minutes to an hour, depending on the quantity.

To bake or roast beets, set the oven at 375 F, and rest them directly atop the oven grate or wrap in aluminum foil. Or, add sliced beets to a lightly oiled baking sheet. It’s possible to add other seasoning to the tray, such as chopped onions, olive oil, lemon juice, potatoes, and turnips.
Note: Beets stain other foods quite easily. If worried about turning an entire dish bright magenta, add beets to the meal right before serving.

Note: Like pomegranates, cut beets stain everything they touch, from hands to cutting boards to clothing. Use lemon juice and baking soda to remove the juice. 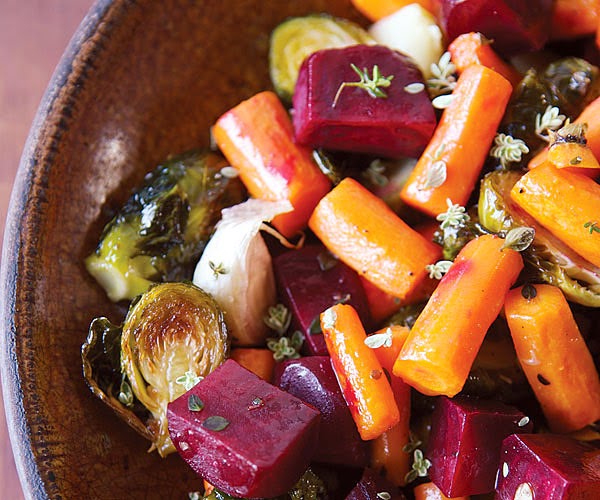 --Make a beetroot bruschetta by steaming beets, and then setting aside to cool. Then, dice the beets. Combine with diced tomatoes, basil, red onion, salt, pepper, chopped walnuts, and olive oil. Leave to marinade before adding to crackers or baguette slices.
--Use beetroot juice as a natural food coloring agent.
--Dehydrate rings of beetroot to make chips.
--Add steamed beetroot puree to baked goods: they create moistness, add color, and reduce the calorie content.
--Add beetroot to any veggie burger recipe.
--Create beetroot chutney by sautéing cubes of cooked (boiled or steamed) beets with the coconut, shallots, garlic, and tamarind. Dry roast the dal, coriander and red chilies, and then blend. Combine the coconut beet mixture, and blend until smooth. Serve along side rice or chapatis.
--Add cooked blended beetroot to rasam recipes.
--Make beetroot poriyal by heating oil and spluttering mustard seeds, dry red chili, pepper, and curry leaves. Also add onions and green chili. Next, add grated beetroot and freshly shredded coconut. Leave the vegetable to cook for 15 minutes, or until it has softened.

Note: Lemon juice and vinegar brighten the color of beets, whereas salt diminishes it.

When American astronauts dined with the Russians during the Apollo 18 space mission, they were offered beetroot soup while on board the Soyuz.

As of the 2005, the Guinness Book of World Records lists that the largest beet clocks in at nearly 157 pounds.

*Note: these interpretations were taken from Google Translate… so take with a grain of salt.

Posted by Catherine Reddy at 10:10 PM